Our confidence is high, says Shakib

Our confidence is high, says Shakib

Bangladesh will not be easily pushed aside when they take on powerful South Africa in a must-win World Cup match on Saturday, skipper Shakib Al Hasan said. 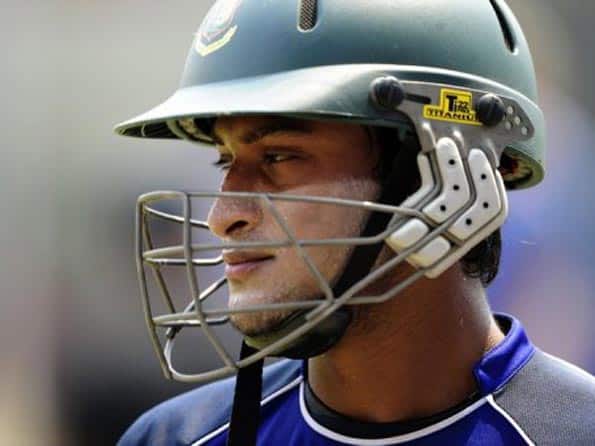 Bangladeshi captain Shakib Al Hasan looks during a team practice session for the World Cup 2011 at The Sher-e Bangla stadium in Dhaka. Shakib said that Bangladesh will not be easily pushed aside when they take on powerful South Africa in a must-win World Cup match on Saturday.

Bangladesh will not be easily pushed aside when they take on powerful South Africa in a must-win World Cup match on Saturday, skipper Shakib Al Hasan said.

“We go into the match after two consecutive wins against England and the Netherlands, so the confidence and morale of the team is high,” Shakib said ahead of the day match at the Sher-e-Bangla stadium. “If we stick to our plans and execute them well, I think we have a very good chance to beat South Africa. They are obviously a very strong team, but we won’t be found wanting.”

England’s dramatic win over the West Indies in Chennai on Thursday ruined Bangladesh’s hopes of easing into the knockout rounds without having to contend with South Africa’s firepower. They now face a make-or-break battle to determine their future in the tournament in front of 25,000 fanatical supporters inside the stadium in Dhaka and millions outside it.

If Bangladesh lose to South Africa, their poor net run-rate (currently -0.765) will almost certainly lead to their exit, unless India defeat the West Indies by a huge margin in Chennai on Sunday. Shakib appeared irritated when asked repeatedly by demanding Bangladeshi reporters about his strategy for Saturday’s game.

“The plan is simple,” he said. “If we bat first we must put up a good score and then restrict them for a lower total. If we field first, we will have to score one run more than what they put up.”

Unlike millions of Bangladeshi supporters, who stayed up late on Thursday night cheering for the West Indies against England, Shakib said he preferred to watch a Bollywood movie. “I watched (Chris) Gayle’s batting and then switched to the movie,” he said. “As far as I am concerned we have to win tomorrow if we want to qualify.”

Shakib said it was not easy to get huge totals on Bangladeshi wickets. “So far only (Virender) Sehwag and (Virat) Kohli have got hundreds in the five matches we have played,” the captain said.

“Our wickets are slower than what you get in India and it is not so easy for batting. So I am pleased that we have batted well enough to win three matches.”

South Africa have won 12 of their 13 one-dayers against Bangladesh, five of them on the Tigers’ home soil, including a 3-0 sweep in 2008. Bangladesh’s lone win came during the Super Eights round of the previous World Cup in the Caribbean when they clinched a 67-run victory on a turning track in Providence, Guyana.

“That win does not matter now,” said Shakib. “It’s a new game and we will look to play our best and win.”

Pakistan are ready to take on Australia, claims Afridi