T20 World cup 2021 Today Match Report- Shoaib Malik and Asif Ali put up an unbeaten stand of 48 off 23 balls which helped Pakistan chase down a 135-run target with eight balls in hand.

Sharjah: Pacer Haris Rauf led a clinical bowling display with an excellent four-wicket haul before Shoaib Malik and Asif Ali’s onslaught as Pakistan complete “revenge” against New Zealand for a recent off-field snub with a five-wicket win in the T20 World Cup at the Sharjah Cricket Stadium on Tuesday. Most of the top-order batters, except for opener Mohammad Rizwan (33), struggled but the experienced Malik (26 not out off 20 balls) and number seven Ali (27 not out off 12) flourished towards the end with a 48-run partnership for the sixth wicket to take Pakistan home with eight balls to spare. (MATCH HIGHLIGHTS)

This was Pakistan’s second consecutive win after their comprehensive 10-wicket victory over India on Sunday. The New Zealand team, playing in its first match, had recently withdrawn from a scheduled series against Pakistan after landing there, citing a security threat which, according to the host country, did not exist. (SCORECARD)

Chasing 135 for a win, captain Babar Azam (9) and Rizwan made a decent start but they were finding it difficult to get the runs and the boundaries as the chase progressed. Azam was not at his fluent best as compared to his brilliant unbeaten 68 against India and was out in the sixth over, bowled by Tim Southee, who got his 100th wicket in T20 Internationals.

Runs were not coming easily for Pakistan at this stage as they reached 30 for 1 at the end of power play and they got another jolt as one-down Fakhar Zaman (11) was trapped LBW by Ish Sodhi in the ninth over.

Former captain Mohammad Hafeez hoisted James Neesham for a six as soon as he came out as Pakistan reached 58 for 2 at the halfway mark.

But, in the next over, he got out with Devon Conway taking a stunning diving catch near the boundary ropes off the bowling of Mitchell Santner.

New Zealand were back into the match with Rizwan, who had scored 79 not out against India, trapped LBW by Sodhi in the 12th over.

After a couple of relatively quiet overs, Trent Boult got his first wicket by getting rid of Imad Wasim (11) in the 15th over. But from there on, Pakistan changed the script of the match, courtesy Malik and Asif Ali.

Pakistan needed 44 runs from the final five overs and in came Ali who clobbered Southee for two consecutive sixes in the 17th over to tilt the match in his side’s favour.

Malik hit a six and a four in the next over before Ali set the Sharjah sky on fire with a six and hit the winning runs — a two — to take Pakistan to 135 for 5 in 18.4 overs.

Earlier, Rauf spearheaded the bowling attack with four wickets as Pakistan restricted New Zealand to a modest total. The Kiwis were in all sorts of trouble after they were invited to bat in the face a disciplined Pakistani bowling attack with opener Daryl Mitchell and Conway top-scoring with 27 each and captain Kane Williamson contributing 25.

New Zealand could not have one substantial partnership with their highest being the 36-run opening stand between Mitchell and Martin Guptill (17). Shaheen Afridi, Imad wasim and Mohammad Hafeez also took one wicket each for Pakistan.

Afridi, who rattled the Indian top-order in Pakistan’s win over India, got the swing in the opening over which was a maiden one. But Mitchell hit a four off his second over which yielded eight runs.

Mitchell then hoisted Hasan Ali for a six as New Zealand looked to take the initiative. But they were unable to come out of the power play unscathed as Rauf uprooted Guptill’s timbers after the ball took a deflection off the batter’s pads.

Mitchell paid the price of going for one too many as he holed out to Fakhar Zaman near the ropes after he smashed a six off Imad in the ninth over.

New batter James Neesham did not last long as he was out for 1 in the next over off Hafeez as New Zealand reached 60 for three at halfway mark.

The Kiwis stepped on the gas and took 25 runs from the 12th and 13th overs together with Williamson smashing Hafeez for a six and a four, even as Conway clobbered Shadab Khan for three successive boundaries.

But the Kiwi innings took a turn after Williamson was run out in the 14th over as Hasan Ali’s brilliant direct throw off his own bowling dislodged the bails.

New Zealand could only reach the 100-run mark at the end of the 15th over and Conway and Glenn Phillips (13) got out in the space of three balls in the 18th over bowled by Rauf. 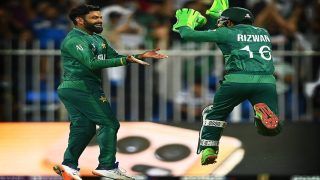 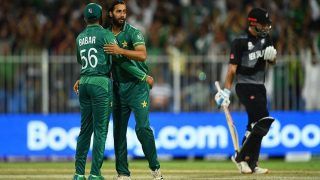