Pakistan are three wickets away from a win. Steven Smith holds fort with unbeaten 31.

Pakistan are only three wickets away from victory as Australia were in tatters at 117 for seven in the first Test at Dubai. Chris Rogers and Steven Smith had been resilient in their defence, but the Pakistani shoulders never seemed to drop. They got rid of Rogers and two other batsmen in quick succession.

The first wicket took more than 17 overs, and it eventually took a peach: Imran Khan, whose name evokes memories of the past, went into the aeroplane celebration when he hit off and middle to get Rogers with a yorker. Rogers, who had earlier erroneously stopped Michael Clarke from going for a referral, scored a 131-ball 43.

With two right-handers at the crease, Misbah-ul-Haq replaced Mohammad Hafeez with Zulfiqar Babar, who took out debutant Mitchell Marsh with his third ball. The vigilant, acrobatic Azhar Ali had been throwing himself all over the place in pursuit of a catch, and on that occasion he showed amazing reflex to pouch Marsh at silly point.

Australia suffered another blow when Brad Haddin played down the wrong line to a straight delivery from Babar. The ball skidded through to hit timber. Pakistan went into lunch with Steve Smith on 31 and Mitchell Johnson on seven, both looking shaky against Babar and Yasir Shah. 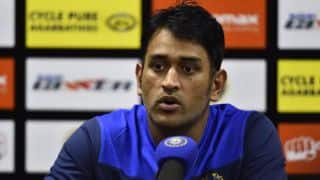 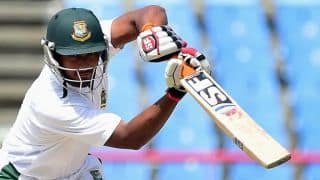