At lunch Bangladesh were tottering at 133 for 5.

Pakistan grabbed four quick Bangladesh wickets on the fourth morning to step closer to a series-clinching victory in the second and final Test in Dhaka on Saturday. Bangladesh, who resumed their second innings at 63-1 chasing an improbable target of 550, tottered to 134 for five by lunch on the fourth day at the Sher-e-Bangla stadium. Live Updates: Bangladesh vs Pakistan, 2nd Test, Day 4

With Shahadat Hossain unlikely to bat after suffering a serious knee injury on the first day, Pakistan effectively need four more wickets to wrap up the series after the first Test in Khulna was drawn. Mominul Haque was unbeaten at the break on 59, joining West Indies great Vivian Richards and the Indian duo of Virender Sehwag and Gautam Gambhir as the only batsmen to score 50 runs or more in 11 consecutive Tests. Live Scorecard: Bangladesh vs Pakistan, 2nd Test Day 4

Soumya Sarkar was the other batsman at the crease on one. Seamer Imran Khan, a late replacement for the injured Rahat Ali, dealt two major blows when he removed the in-form Tamim Iqbal and Mohammad Mahmuddulah in the space of nine runs. Tamim, who slammed a double-century in the first Test, was caught behind by wicket-keeper Sarfraz Ahmed for 42 as he slashed at a short delivery from Imran.

Mahmudullah made two when he edged Imran to second slip where Younis Khan picked up the catch on second attempt as Bangladesh slipped from 86-1 to 95-3. Off-spinner Mohammad Hafeez struck in his first over when Shakib Al Hasan (13) stepped out to loft a flighted ball and gave Wahab Riaz an easy catch at mid-off.

Bangladesh captain Mushfiqur Rahim had yet to score when he dragged a delivery from leg-spinner Yasir Shah onto the stumps to reduce Bangladesh to 126-5. Pakistan are looking to end an otherwise dismal month-long tour on a winning note after being routed 3-0 in the one-day series and losing to Bangladesh for the first time in a Twenty20 international. 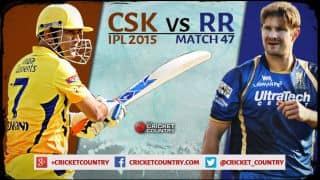