Abdur Rehman finished with career-best figures, and shared the last five wickets with fellow spinner Saeed Ajmal to usher Pakistan to a series-levelling 196-run victory in the second Test against West Indies on Tuesday. 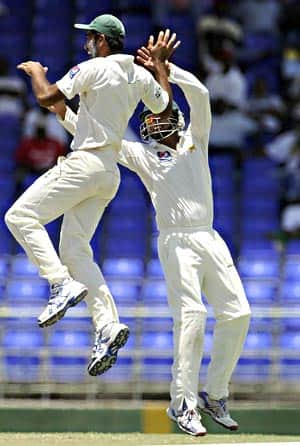 Abdur Rehman finished with career-best figures, and shared the last five wickets with fellow spinner Saeed Ajmal to usher Pakistan to a series-levelling 196-run victory in the second Test against West Indies on Tuesday.

Rehman captured four for 65 from 24.3 overs, and Ajmal took three for 79 from 31 overs, as West Indies, in pursuit of a highly improbable target of 427, were dismissed for 230 in their second innings about 15 minutes before lunch on the final day at Warner Park.

The match came to an anti-climatic close, when Kemar Roach failed to beat Wahab Riaz’s direct hit at the bowlers’ end, and was run out for 12, after indecision about taking a single with Devendra Bishoo.

The Pakistani victory meant the two-Test series was tied 1-1, after West Indies claimed a 40-run victory in the first Test.

“I think one thing is good about this side, especially this bunch of guys, is that they have a real true fighting spirit,” said Pakistan captain Misbah-ul-Haq.

“I think that helped us to get back into this game, and win to tie the series.”

Misbah noted it has been difficult playing so much away from home because of safety concerns, but they were many positives to this sad reality.

“We are getting more experienced playing in foreign conditions, and we learning more and more how to adapt ourselves and our cricket to different conditions,” he said.

“I think it has also helped our team unity because the guys are getting stronger mentally, and are still performing well in conditions to which they are not accustomed.”

Misbah also hailed the fielding of his side in the match, a transformation from the first Test, when they dropped close to 10 catches.

“This is the one area where we were certainly behind in the previous Test, and I think in this game, the fielding was the difference between the two sides.”

West Indies captain Darren Sammy signed-off with a boundary-studded 41, but he viewed the outcome of the series as an opportunity lost for his side to prove that they have truly turned a corner in their woeful performances in recent times.

“We had good momentum coming into this game, and I think we lost that momentum when the Pakistan last wicket pair put on 78 in the first innings,” said Sammy.

“But we just did not score enough runs in this game. We are not happy with this, or the way we have batted throughout the series.

“Cricket is about runs and wickets, and in order to win, we have to score more runs, and we have not been able to do this for a while now.

“This means our batsmen have some work to do. We have Dessie (Haynes) working with us, and he has been doing some good work, but we now have to put what we learn from him to work for us in the middle – that’s where it counts.”

Off-spinner Ajmal, whose 17 wickets in the series made him a shoo-in for the Man-of-the-Series award, struck in the third over of the day, when he had left-hander Brendan Nash caught at slip by Man-of-the-Match Taufeeq Umar without addition to his overnight 30.

Rehman twice missed-out on his fourth scalp, when Azhar Ali at point dropped Carlton Baugh Jr, on 15, in the sixth over of the day.

The left-arm spinner also thought he had Baugh on 16, but a review of Sri Lankan umpire Asoka de Silva’s not-out decision for either a catch to silly-point or lbw was unsuccessful.

Rehman however, eventually got the diminutive West Indies wicketkeeper/batsman for 18, when he had a second lbw decision from de Silva successfully reviewed.

After this, it was just a matter of time before the end came for West Indies, with Ajmal hastening the end, when he had Sammy caught at mid-wicket, and Ravi Rampaul caught at silly-point for 20, which comprised two fours and two sixes.

Man of the Match: Taufeeq Umar