Pakistan coach Mohsin Khan on Friday warned England will feel the heat to maintain their world number one ranking against his fast-rising team in the three-Test series starting next week. 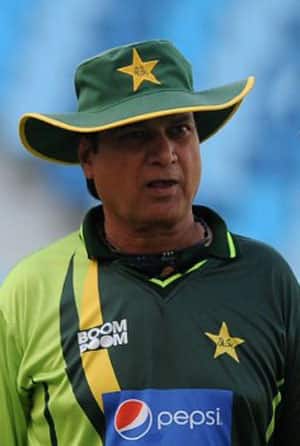 Pakistan coach Mohsin Khan on Friday warned England will feel the heat to maintain their world number one ranking against his fast-rising team in the three-Test series starting next week.

England rose to the top of ICC (International Cricket Council) Test rankings after beating India 4-0 on their home grounds last year but face a stiff challenge against a resurgent Pakistan on the slow tracks of United Arab Emirates.

Khan, a former opening batsman, said England will be hard pressed to maintain their top standing.

“I won’t say they will be hugely under pressure, but definitely this kind of pressure will be there, because they have to maintain their position. Once a team or a person attains the top position that pressure exists,” said Khan, 56.

Khan, who took over as interim coach after Waqar Younis quit the post in September last year, said his team was rising fast.

“Pakistan is coming up and coming up fast over the last 18 months. I am working hard with the boys who are also doing their best and we are expecting for some favourable results,” said Khan.

Pakistan have not lost a Test series since losing to England on the 2010 tour.

Khan praised England’s balance as they won both the side games ahead of the first Test starting from Tuesday. England beat Pakistan Cricket Board XI by 100 runs on Friday.

“I feel that apart from England being ranked number one, which I don’t care much about as rankings goes up and down, but they are a very balanced side and will pose good competition for us.

“As far as my team goes, I can happily say that we have a talented side and we have to mix up that talent with a professional attitude to counter the opposition,” said Khan, who termed the series as a test for the batsmen.

“I think both teams have a good pace attack, good spinners, so it will be a test for the batsmen because both the teams have good bowlers,” said Mohsin, who started his 48-Test career against England in 1977.

Khan admitted spinners would have a role in the series.

Panesar, a left-arm spinner, staked his claim for a place for the first time since 2009 with a haul of eight wickets in the second tour match.

“I have high respect for England, for the kind of cricket they are playing and so are we. Our captain (Misbah-ul Haq) and the team is focused so we will try to bring wonderful results for us and be very competitive,” said Khan.

The three-Test series will be followed by four one-day and three Twenty20 internationals. (AFP)