Malik submitted a plea to the PCB to revoke the ban imposed in 2000.

Karachi: Jul 9, 2014
Former Pakistan captain Saleem Malik has been given a lifeline by the Pakistan Cricket Board (PCB) as it has approached the International Cricket Council (ICC) for guidance and advice on whether the ban on the disgraced batsman could be removed.”We have written to the ICC and asked it to guide us as this is a complicated case. Malik claims that a lower court removed his life ban way back in 2008,” chief operating officer, Subhan Ahmad said.

“Malik had requested the PCB Chairman to review his case and ask for guidance from the International Cricket Council as well,” he said.

Malik, 51, was banned in 2000 by the Justice Malik Qayyum judicial inquiry commission, which found him guilty of match fixing and also making approaches to Australian cricketers — Shane Warne and Mark Waugh — to lose the 1994-95 Karachi Test.

Malik, who played 103 Tests and 283 One-day Internationals, has since then appealed against his life ban in different courts and in October, 2008, a sessions court rescinded the ban, but the PCB is yet to accept the decision.

Ahmad said Malik had submitted his relevant court documents to the PCB, which would be studied by the ICC as well.

Malik approached the Chairman of the board, Najam Sethi in late April and claimed that a lower sessions court had declared his life ban illegal in 2008 and there was no legal reason for the board to stop him from taking part in any cricket activity.

The matter came to a head after Malik formed a players’ welfare body and tried to organise a benefit match for Test pacer Ehteshamuddin at the Gaddafi stadium in Lahore.

“I am happy that the PCB is now finally taking my plea seriously and has approached the ICC. I want them to also look at the court order, which removed the life ban six years back but since then no one in the board took my case seriously,” Malik said.

The former skipper said he had served Pakistan cricket for 19 long years and just wanted his reputation to be restored.

“No one can return to me the 14 years I lost in this ban but at least now the board can give me a chance to give something back to Pakistan cricket. I want to set up my own academy and also do coaching,” he added. 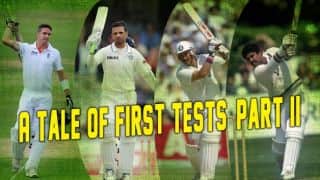