The PCB had initially permitted the players to play in the Caribbean league, which starts from July 13.

Many Pakistani players might have to forgo contracts to play in the Caribbean Premier League (CPL) this year as the dates of the T20 event clash with the national training camp that will be set up in Lahore for the tour of Sri Lanka in August. The PCB had initially permitted the players to play in the Caribbean league, which starts from July 13 as at that time no tour to Sri Lanka was scheduled by the board.

“The tour to Sri Lanka came up suddenly and is not part of the future tours program. And we are planning to start a camp for the tour from July 15,” a PCB official told PTI.

The board has even told Saeed Ajmal and Junaid Khan, who are playing in English county cricket, that they have to be back home for the camp. “All this means that Mohammad Hafeez, Ahmed Shahzad, Umar Akmal, Sohail Tanvir, Saeed Ajmal and Nasir Jamshed, who have been signed on by different franchises in the Caribbean league, will now have to cancel their lucrative contracts,” a source said.

Several Pakistani players had taken part in the inaugural Caribbean Premier League last year, including Test and one-day captain, Misbah-ul-Haq. The inaugural edition was won by the Jamaican franchise.

In the past also Pakistani players have had to forgo contracts to play in the Big Bash in Australia and in the English domestic T20 event because of the board’s failure to have a clear cut policy on players participation in foreign leagues. An official, though, made it clear that the policy laid out in the new central contracts states that national duty came above any other commitment. 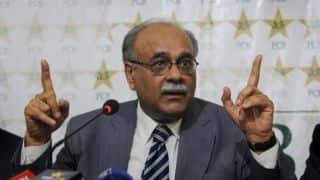