Pakistan's one-day squad left for the Caribbean with captain Misbah-ul-Haq hoping to reverse the team's dwindling fortunes in the limited-over matches. 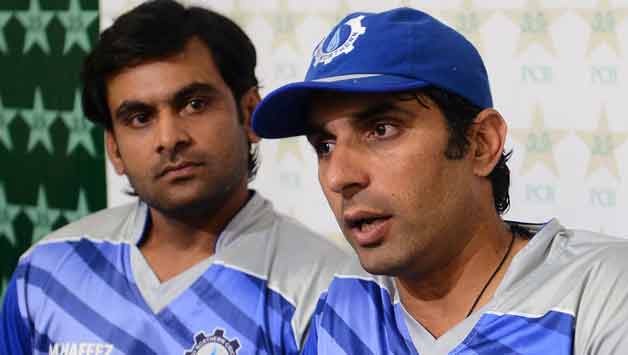 Pakistan‘s one-day squad left for the Caribbean with captain Misbah-ul-Haq hoping to reverse the team’s dwindling fortunes in the limited-over matches.

Pakistan will play five one-day and two Twenty20 matches on the tour, with the first match in Guyana on July 14.

Misbah said the tour was important as it would help the team regain their confidence after a humiliating ICC Champions Trophy 2013 last month, in which Pakistan lost all three matches.

“We will do our best to play hard and positive cricket and ensure that a poor show in the Champions Trophy is behind us,” Misbah said before their departure late on Sunday.

“The squad is focused on putting up a good show which will help in ending the disappointment of our fans and bring the confidence back.”

Misbah said they faced a challenging proposition playing the Windies on their home soil.

“West Indies is a tough opposition and their batting strength is aggressive but I am sure that our team will do well in all three departments of the game,” said Misbah.

Dashing all-rounder Shahid Afridi was recalled in the 16-man squad after missing the Champions Trophy in England, while there were also recalls for Umar Akmal and Ahmed Shehzad.

Umar will also keep wicket in the absence of his elder brother Kamran, dropped for the series.

Also left out were Shoaib Malik and Imran Farhat who both failed in the ICC Champions Trophy 2013.

Three players — Hamad Azam, Zulfiqar Baber and Sohail Tanveer — will leave for the Caribbean later to feature in the two Twenty20 matches.

Sourav Ganguly: Nearly five years after stepping down, the Prince of Kolkata continues to rule the hearts of his fans