The third and final T20I series decider will be played on January 28 at Bay Oval, Mount Maunganui.

Pakistan finally came into their own after being hapless in the ODIs and first T20Is against New Zealand. Led by Sarfraz Ahmed, Pakistan ended their win drought by winning the all important T20 at Auckland and keeping the three-match series alive. New Zealand looked complacent in the middle with both bat and ball.

Set a target of 202 to win, New Zealand lost Colin Munro and Kane Williamson in a jiffy, courtesy Rumaan Raees and Mohammad Aamer. This was Williamson’s first T20I duck as captain. Martin Guptill did keep the hosts flag high but fell soon for a 27-ball 26.

Tom Bruce (11), Glenn Phillips (5) and Colin de Grandhomme (10) were a no-show at Eden Park. It was then that Mitchell Santner and Ben Wheeler snitched a stand. Both added 34 runs in quick time to keep New Zealand s hopes alive but for the rising run-rate. Aamer came back and broke the stand nipping Santer for 37. Wheeler too fell soon, making a 20-ball 30.

Batting first, it was the Pakistani pair of Fakhar Zaman and Ahmed Shehzad that gave the visitors a brilliant start. Zaman in particular took in the likes of Trent Boult and Seth Rance. He reached his first T20I fifty off 26 balls. Shehzad looked good but fell trying to drive Rance.

Zaman fell soon, giving his wicket to Grandhomme for a 28-ball 50. Sarfraz Ahmed came out at No.4 and showed why he should bat up the order. He along with Babar Azam added 91 runs, that saw Pakistan cross the 200-run mark.

Wheeler broke the stand claiming Ahmed for 41. He quickly picked Ashraf for a golden duck. Azam kept his calm and reached his fifty T20I fifty in the process. 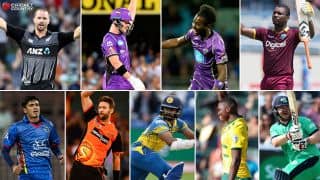