Pakistan took four crucial Australian wickets to give themselves a healthy advantage (a lead of 378 runs) at the end of play on Day 4 of the first Test match against Australia. The visitors had started their resistance on a good note, seeing out the initial 13 overs. However, the 14th over from Zulfiqar Babar was a double-wicket maiden, and it saw the dismissals of David Warner and Alex Doolan. Warner, who scored a century in the first innings, charged down the track (which was silly considering the circumstances) to Babar and was stumped by Sarfraz Ahmed. Wickets fell thick and fast as Alex Doolan, Michael Clarke and night-watchman Nathan Lyon were all out LBW.

Debutant Yasir Shah, whose bowling action resembles that of Shane Warne, bowled like a veteran and took a double-wicket maiden which saw Clarke and Lyon walking back to the pavilion. He had taken a three-wicket haul in the first innings too,

The final session post Tea started with Pakistan already having a lead of 381 runs. It seemed as if the Pakistani management were waiting for Younis Khan to score his 26th century, before declaring. Ahmed Shehzad, who had scored a scintillating century fell right after the tea break, trying to play a cheeky reverse sweep off Nathan Lyon. Despite his dismissal, Younis Khan kept hitting his shots and reached his century to much applause. He broke Inzamam ul Haq’s tally of 25 Test hundreds.

Pakistan will look to finish things early on the final Day, while only a miracle can save Australia. 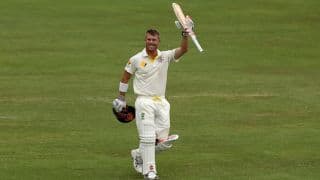 Pakistan vs Australia 2014: David Warner admits that Australia is not scared of big targets 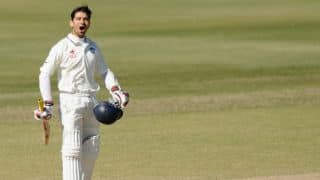