Pakistan captain Misbah-ul-Haq was fined 40 per cent of his match fee while the other players lost 20 per cent.

Pakistan‘s players were Sunday fined for a slow over-rate during their victorious second Test against Bangladesh in Dhaka. The visitors crushed Bangladesh by 328 runs on Saturday, with a day in hand, to take the two-Test series 1-0. Match referee Jeff Crowe imposed the fine after Misbah-ul-Haq’s side was ruled to be two overs short of its target when time allowances were taken into consideration. REPORT: Pakistan demolish Bangladesh 328 by runs, take series 1-0

Misbah was fined 40 per cent of his match fee while the other players lost 20 per cent. Under the rules, players are fined 10 per cent of their match fee for every over their side fails to bowl in the allotted time, with the captain fined double that amount. READ: Bangladesh: Joy of watching the Bangla Tigers succeed

“Misbah pleaded guilty to the offence and accepted the proposed sanction, so there was no need for a formal hearing,” the International Cricket Council said in a statement.  READ: Have Bangladesh conquered their fear of losing?

Pakistani medium pacer Imran Khan has been reprimanded for breaching the game’s code of conduct during the match, the ICC also said. After dismissing batsman Tamim Iqbal on the fourth day, he appeared to “give the batsman an aggressive and continued send-off”, it said.

The win helped Pakistan end an otherwise dismal month-long tour on a positive note after being routed 3-0 in the one-day series and losing to Bangladesh for the first time in a Twenty20 international. 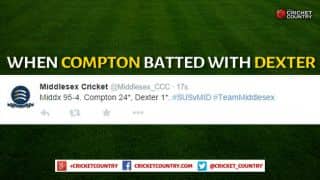