Mitchell Santner was struck on his right wrist while training with the Northern Districts and is also doubtful for the second match of the two-test series.

New Zealand spinner Mitchell Santner has been ruled out of this month’s opening test against Pakistan with a fractured wrist, the country’s cricket board said on Friday. The 24-year-old left-armer was struck on his right wrist while training with the Northern Districts and is also doubtful for the second match of the two-test series. Santner, who has played 10 tests for the Black Caps, showed promise during the recent tour of India where New Zealand were blanked 3-0 in the test series and lost the following five-match one-day international series 3-2. “After such a strong tour of India, it’s really disappointing for Mitch to pick up this injury ahead of the first match of the home summer,” New Zealand coach Mike Hesson said in a statement. READ: Pakistan announce 16-man squad for New Zealand; Mohammad Hafeez dropped

“We’re unsure whether Mitch will be available for the second test at this stage, but we’ll be monitoring his recovery closely and look forward to having him back.” The first test against Pakistan begins on Nov. 17 in Christchurch with the second test in Hamilton from Nov. 25.

New Zealand have had a disastrous Test series in India as they were whitewashed 3-0. Santner was the highest wicket-taker for New Zealand along with Trent Boult in the series with 10 wickets and one of the brightest prospect for the team as far as spin bowling is concerned. New Zealand, who have so far won only two Tests under the captaincy of newly appointed captain Kane Williamson, will look to better their numbers with the series at home. 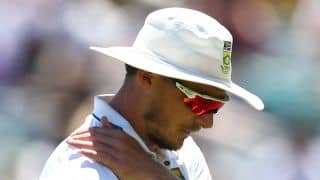