Australia were 143 for 4, trailing by 460 runs at stumps on Day Four of the second Test against Pakistan at Abu Dhabi on Sunday.

Younis Khan and Azhar Ali had started the day scoring runs at a slow rate, presumably with the intention of tiring out the Australian players. The strategy was working fine, until Steven Smith got the better of Younis and dismissed him for 46. After his dismissal, Misbah ul Haq came on the crease, and started his innings with a boundary down the ground.

The Pakistani captain played many more aggressive shots in his innings, and created the record for scoring the fastest 50 in Test cricket by reaching the landmark in just 21 balls. He also went on to equal Sir Vivian Richards’ record for fastest Test century by getting there in 56 balls. His innings overshadowed that of Azhar Ali’s, who too scored an impressive century.

After the two players had scored their century, Pakistan declared with a healthy lead. Australia had to bat a little more than four sessions in order to save the Test match, and they started on a bad note. Chris Rogers departed early after Asad Shafiq took a simple catch at leg slip. Glenn Maxwell who came at No 3, didn’t last long as he was dismissed LBW by Zulfiqar Babar.

In the final session, skipper Michael Clarke fell in the first over itself. After his dismissal, David Warner and Steven Smith combined well and formed a 58-run partnership to give Australia a glimmer of hope of saving the Test match.

Warner fell soon after scoring his 50, and it was left to Mitchell Marsh and Smith to hold fort for Australia until stumps. 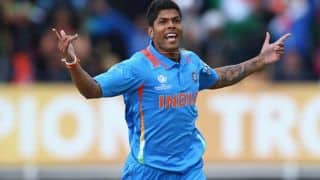 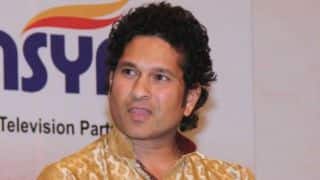 Sachin Tendulkar sheds light on struggle, says he had to cycle to get to ground as a kid