Legendary Pakistan batsman Javed Miandad has once again spewed vitriol against India as he accuses Virat Kohli-led Indian cricket team of ‘fulfilling political means’ during a live cricket match. The Men in Blue sported ‘army caps’ during the third ODI against Australia in Ranchi on March 8 earlier this year.

Team India wore the caps in respect to pay their tribute or commemorate the CRPF jawans who lost their lives in the Pulwama terrorist attack.

Javed Miandad “The reason I wore an army cap in Rawalpindi was as a mark of respect for Pakistani Armed Forces who devote their lives to serve our nation. This gesture was not due to what the Indian team did in the past but this is just how I feel about my country’s Armed Forces” pic.twitter.com/QVz2y98PSC

Expressing their displeasure over it, Pakistan lodged an official complaint with the International Cricket Council (ICC) to take action against India for mixing politics with sports. However, the international cricket body rejected PCB’s request and stated that India had sought permission for it and was given the thumbs up to wear the army caps.

Miandad’s comments come after he was seen wearing an army cap during the ongoing first Test between Pakistan and Sri Lanka in Rawalpindi, which marked the return of Test cricket to Pakistan after 10 years.

The 62-year-old and former Sri Lanka cricketer Bandula Warnapura were invited as special guests for the first Test.

When asked why he wore an army cap, Miandad was quoted by Ary Sports as saying: “I wore an army cap just to show love for my army, and nothing else. I wanted to be a soldier and I used to wear such caps often during my childhood.

This is not the first time Miandad has made controversial remarks against India. He had previously too commented on abrogation of Article 370 A from Jammu and Kashmir. He asked the Kashmiris to pick up arms and retaliate against the government.

Miandad also called the Narendra Modi-led Indian government a ‘coward’ and said that Pakistan has not kept a nuclear arsenal for the show but to deploy on India. “Hume mauka chahiye aur hum saaf kar denge (we just need a chance, we will wipe out India)” he told the media. 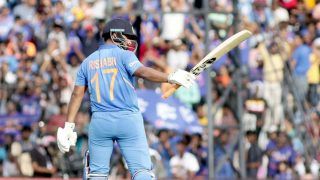