Pakistan were 30-2 at lunch on the second day of the third and final Test in Dubai on Saturday, trailing England by 12 runs after losing both openers. 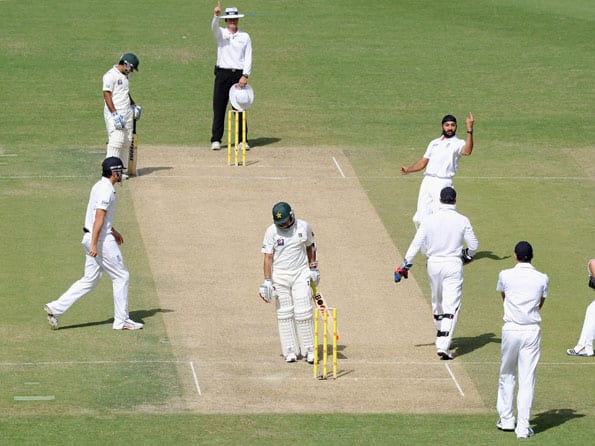 Pakistan were 30-2 at lunch on the second day of the third and final Test in Dubai on Saturday, trailing England by 12 runs after losing both openers.

Pakistan, with an unassailable 2-0 lead in the series, lost Taufiq Umar (six) and Mohammad Hafeez (21) in their second innings after England posted 141 for a first-innings lead of 42.

At the break Azhar Ali (one) and Younis Khan (one) were at the crease on another day of bowlers’ domination, after 16 wickets fell on the first day with Pakistan dismissed for 99 in their first innings.

Earlier Abdul Rehman took 5-40 — his second five-wicket haul after a career-best 6-25 in Pakistan’s 72-run win in the second Test in Abu Dhabi.

Paceman James Anderson again gave England an early breakthrough, forcing an edge off Umar which Andrew Strauss held in front of his knees in the slips.

Hafeez, who hit a six off Monty Panesar, fell leg-before to the left-armer in his next over, leaving Pakistan in a spot of bother at 28-2.

Captain Strauss top-scored with 56 for England before he was stumped by wicketkeeper Adnan Akmal off Rehman. Strauss hit five boundaries during his laborious 150-ball stay at the crease.

Resuming at 104-6, England lost nightwatchman Anderson in the first over of the day when he missed a sharp turning delivery from Rehman and was bowled.

BCCI has not received official notice on Sahara's pull out: Rajiv Shukla