Pakistan came into the World Cup besieged by a corruption scandal and doubts over Shahid Afridi's captaincy but they now stand on the verge of the last eight with the tournament's only perfect record. 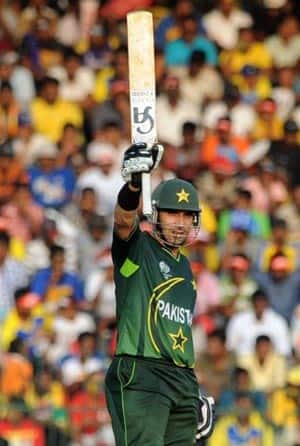 Pakistan meet New Zealand at the newly-built Pallekele stadium in the first-ever one-day match at the venue, a factor which Pakistan vice-captain Misbah-ul-Haq believes will give both teams plenty to think about.

Pakistan came into the World Cup besieged by a corruption scandal and doubts over Shahid Afridi’s captaincy but they now stand on the verge of the last eight with the tournament’s only perfect record. Inspired by Afridi, who has led from the front with a tournament-high 14 wickets, Pakistan sit on top of Group A with six points after wins over Kenya, Sri Lanka and Canada.

Now they face New Zealand in Pallekele, Sri Lanka, on Tuesday, who are in fourth place in the group with two wins.

But they have regrouped and Afridi, who is also known for his devastating hitting, has turned the side into genuine contenders for their first World title since 1992.

Amid the focus on the 31-year-old, Test skipper Misbah-ul-Haq urged his team-mates to take the pressure off Afridi, who took 5-16 against Kenya and followed up with four wickets against Sri Lanka and five against Canada.

“It’s really very good for a team that its captain is doing well, but other players are also required to play well, take responsibility and ease pressure off the captain,” said Misbah.

Pakistan are set to bring in paceman Shoaib Akhtar after resting him for the previous match against Canada, while left-arm spinner Abdur Rehman is also available after missing that game due to a leg muscle injury.

New Zealand captain Daniel Vettori said he was aware of how good Pakistan’s bowling attack could be. “They can probably defend any score because of the nature of their bowlers. They bring a lot to the table,” he said.

New Zealand, who lost to Australia by seven wickets but eased past Kenya and Zimbabwe by 10 wickets in each game, have four points after three matches. “It’s a matter of stepping up against the harder teams,” said Vettori, whose country has lost six World Cup matches against Pakistan since winning their first in 1983.