The new contracts would be announced in June by the PCB.

The Pakistan players are certain to get reasonable pay hikes in their central contracts and match fees from the Pakistan Cricket Board (PCB) but the authorities have decided to only give out the contracts after the conclusion of the month-long summer camp in Lahore.

“The contracts will be announced in June because we first want to see which players meet up to the fitness benchmarks set by the coaches in the camp,” one source in the board told PTI.

He said that PCB Chairman, Najam Sethi had also given his consent to the team management to not show any relaxation on fitness issues. “Only players who meet the fitness standards set out by the camp commandant, Mohammad Akram with the help of the PCB medical panel will get contracts,” the source said.

The Pakistan team will be supervised by a new management and support staff for their coming international commitments starting with a tour to Sri Lanka in July after the board announced that former captain, Waqar Younis will be head coach while Moin Khan has been named chief selector and manager.

The board is set to also announce the new batting coach, fielding coach and bowling consultant and fitness trainers and doctors this week to complete the team management.

The source said although the contracts were already late by around five months but they would be given out back dated with the raises.

“The pay hikes in the contracts and match fees will be between 20 to 30 percent and the board has also decided to not abolish the system of cash awards for peak individual performances this year,” the source stated.

Pakistani players earn between 350,000 to 200,000 rupees as monthly salaries in their contracts in three categories while match fees are given separately. Test match fees for the category A players is 440,000 and for those in B category 385,000 and the C category players get 325,000.

Sethi has already held meetings with senior players like captain, Misbah-ul-Haq, Younis Khan and Shahid Afridi to discuss pay raises and the source said he had agreed to some of the demands made by the players.

The source said the new national selection committee had also advised the board to hold back the contracts so that players retain their interest during the summer training camp where there is lot of emphasis on physical training and fitness.

“That is why awarding of the central contracts has been held back,” he added. 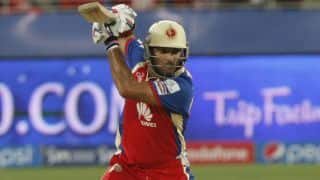