He pointed out that the Lahore team had left a positive image of Pakistan cricket among the Indians. “Until now the absence of our players from the IPL is very disappointing but we are trying our best to improve bilateral cricket ties with India,” he said.

Khan is also scheduled to leave for India on October 3 as a special emissary of Prime Minister Nawaz Sharif for some back channel diplomacy. After India, he will visit Bangladesh and Sri Lanka in official capacity as PCB Chairman.

Khan said Pakistan was keen to restore and have normal relations with the Indian board. “We are willing to host the Indians at any neutral venue selected with mutual cooperation of both boards. But we want the restoration of bilateral cricket series as soon as possible,” he said.

The PCB chief said while Pakistan had struggled to launch its own T20 franchised league but it was unfair to compare it with the IPL.

“Indian cricket has moved well ahead of us organisation and financial wise and right now no other T20 event compares with the IPL,” Khan added. 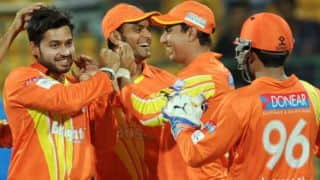