Darren Sammy, the two-time ICC World Twenty 20 winning captain for West Indies, will be leading Peshawar Zalmi replacing Shahid Afridi and they will be up against the strong Misbah-led unit.

Islamabad United will take on Peshawar Zalmi in the first match of the Pakistan Premier League (PSL) 2017 at Dubai International Cricket Stadium, Dubai. The Misbah-ul-Haq-led Islamabad United will be hopeful of replicating the performance that they displayed in the inaugural season where they lifted the championship trophy. The second edition of the tournament will be played between February 9 and March 7. While the tournament will be played in the United Arab Emirates, the final has been scheduled to be played at Lahore.

Darren Sammy, the two-time ICC World Twenty 20 winning captain for West Indies, will be leading Peshawar Zalmi replacing Shahid Afridi and they will be up against the strong Misbah-led unit.

The United have roped in Johan Botha as the side’s fielding coach for this edition. And since Andre Russell was handed a year’s ban, England’s Steven Finn has been included in the squad.

Shane Watson, Mohammad Irfan, Sharjeel Khan, Samuel Badree, Misbah and Dwayne Smith are some of the main players in the unit.

Misbah, Pakistan’s Test skipper, who led the side to the No.1 position in Test rankings last year will contemplate his future as a Test cricketer after PSL. Pakistan were ordinary in the later part of the year as they suffered whitewashes in New Zealand and Australia. His form with the bat has been ordinary of late and he will look to make a strong statement.

Peshawar topped the league phase in 2016. However, they couldn’t maintain their impressive run at the fag-end of the tournament losing both qualifier and eliminator, and crashing out of the tournament. They will be without the services of Alex Hales and Mohammad Shahzad for the second edition of the tournament. Hales injured his thumb in India, while Shahzad will be busy with national duties as he will be facing Afghanistan in a five-match ODI series against Zimbabwe.

Tamim Iqbal is unavailable due to international commitment but they still have Tillakaratne Dilshan, Sammy, Eoin Morgan, Kamran Akmal, Afridi, Mohammad Hafeez and Junaid Khan in their ranks to pose a potent threat. 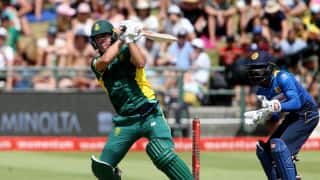