Pakistan resurrected their innings to reach 87 for three at tea on Day Three of the first Test match against Zimbabwe at Harare on Thursday.

Pakistan won by 221 runs
Man of the Match: Younis Khan 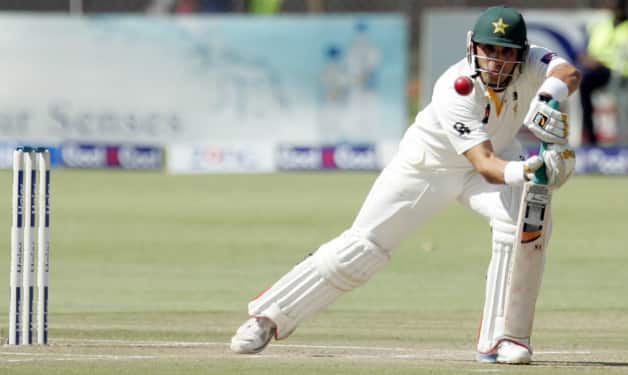 Pakistan resurrected their innings to reach 87 for three at tea on Day Three of the first Test match against Zimbabwe at Harare on Thursday.

Resuming at 21 for one, the visitors were reduced 23 for three within five overs of the second session of play. Skipper Misbah-ul-Haq added an unbeaten stand of 64 runs with Younis Khan for the fourth wicket.

Earlier, after resuming at 281 for seven on Day Three, the hosts managed to add just 46 runs to their overnight score. Saeed Ajmal’s seven-wicket haul helped Pakistan bowl out Zimbabwe for 327.

Zimbabwe came back to strike quickly as they dismissed Pakistan opener Khurram Manzoor for just five.

Resuming post tea at 163 for three on Day Two, Raza and Waller continued to strengthen their partnership when both came together at the score of 68. Pakistan pacers who tested the batsmen paid the price for being erratic in their approach.

Raza completed his fifty on debut with a boundary off Junaid Khan. In the next over though, Ajmal found the much needed breakthrough dismissing Waller for 70. After a few overs, Ajmal enticed Raza who tried to hit hard and was caught but skipper Misbah-ul-Haq at midwicket.

Ajmal then dismissed keeper Richmond Mutumbami while Rahat Ali managed to remove Prosper Utseya late in the day. Elton Chigumbara though managed to hold on to a confident 40 and was accompanied by Shingi Masakadza at stumps on second day.

In the morning, Zimbabwe took little time in wrapping up Pakistan’s innings by dismissing overnight batsman Saeed Ajmal (49) on the second ball of the day.

With a handy lead and three more wickets left, Zimbabwe would be keen to accumulate as many runs as possible to take firm control of the Test after claiming honours at stumps on both days.