Pakistan bowlers enjoyed a field day as they picked up nine wickets inside the first session to record a massive 221-run victory against Zimbabwe at the Harare Sports Club. Saeed Ajmal picked up four wickets in the innings to register his fourth 10-wicket haul in Tests while Abdur Rehman also finished with four wickets. Pakistan bowlers enjoyed a field day as they picked up nine wickets inside the first session to record a massive 221-run victory in the first Test against Zimbabwe at the Harare Sports Club. Saeed Ajmal picked up four wickets in the innings to register his fourth 10-wicket haul in Tests while Abdur Rehman also finished with four wickets.

After having conceded a 78-run lead in the first innings, Pakistan clawed their way back into the game via Younis Khan‘s 22nd Test century and a vital knock from Adnan Akmal on the fourth day. Their didn’t just put the game out of Zimbabwe’s reach but also setup a brilliant platform for the bowlers to run riot on the fifth day.

Resuming from an overnight score of 13 for one with 329 runs to get, Zimbabwe were jolted early on. Hamilton Masakadza was dismissed in the second over of the day. Khan banged the ball in short that went off Masakadza glove to Azhar Ali at gully. Khan, who was visibly fired up by the early wicket, dismissed Vusimuzi Sibanda in his next over. Khan came around the wicket and trapped Sibanda in front of the stumps to reduce the hosts to 19 for three.

Sikandar Raza and Malcolm Waller attempted a fight back by adding 30 runs for the fourth wicket. However, Abdur Rehman enticed Waller with a flighted delivery as the latter went after him and failed to clear the deep square leg fielder.

Khan picked up his third wicket of the day by trapping Raza in front of his stumps. At this stage, half the Zimbabwean side was back in the pavilion with the score on 58. Elton Chigumbura and Richmond Mutumbami tried to weather the storm with a 31-run stand for sixth wicket before the former was packed off by Rehman.

Ajmal, who was brought into the attack in the previous over, struck two blows on the hosts in the same over to reduce them to 90 for eight. First to go was Prosper Utseya who chopped a spinning delivery onto his stumps. His third victim of the innings — and 10th of the match — was Shingi Masakadza who failed to read the quicker one from spinner and was trapped leg before.

Having picked more than seven wickets, Pakistan had the option of delaying lunch in their pursuit of wrapping up the game. Tinashe Panyangara welcomed the decision with a boundary from the first ball of an Ajmal over. However, an over later Rehman struck to get rid of him and take his side within touching distance of a massive victory.

The last pair frustrated the visitors for a brief period before Ajmal dismissed Tendai Chatara to finish the game.

Man of the Match: Younis Khan 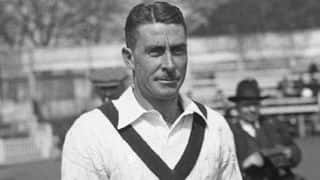 George Hirst: One of the greatest all-rounders, and the pioneer of 'swerve’