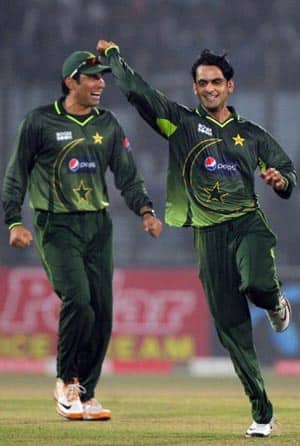 Afridi made it clear while talking to reporters here that he had never run after the captaincy nor was he disappointed that he was not given the T20 captaincy.

“As far as I am concerned I have never run after the captaincy. Hafeez is now not only the choice of the board to lead the team but also the choice of a cricket loving nation.

I am there to support him all the way just like other players of the team have to do,” Afridi said.

The former skipper said he would be there to not only perform as a player but also provide whatever advice or assistance Hafeez needed.

“We will support him all the way,” he said.

Afridi, who is the most senior player in the national side, was removed as captain of the one-day side last year after a dispute with the board.

After that incident, Misbah-ul-Haq led the national team in all three formats of the game but earlier this month the board announced that Hafeez would be the new T20 captain while Misbah would continue to lead the team in Tests and ODIs.

Afridi also conceded that he was keen to improve his batting averages on the coming tour of Sri Lanka in the T20 and one-day matches.

“In recent times while I am satisfied with the way my bowling has gone obviously I could have done better with the bat. On the coming tour I am keen to improve my batting performances,” Afridi said.

Afridi snapped up a hat trick in a practice match organised among the players attending the national camp in Lahore the other day.

The allrounder expected Pakistan to do well in Sri Lanka pointing out that pitches and conditions there generally tended to encourage the bowlers.

“Bowlers get some assistance from the pitches so I am looking forward to a good series,” he added.

Afridi also pointed out that Pakistan would have a tough few months ahead of them as they will be playing Sri Lanka and Australia before taking part in the ICC T20 World Cup in Sri Lanka.

“The next few months are important for us. The coach and trainer have been working hard with us and if we do well we can improve our rankings in all three formats of the game,” he said. (PTI)