India and Pakistan‘s ongoing ICC Champions Trophy 2017 final, touted as ‘mother of all clashes’, saw Pakistan post a whopping 338 for 4 in 50 overs. Put into bat, Fakhar Zaman’s maiden ODI century saw Pakistan register the highest score in the current edition. Not only this, the Men in Green also notched up the second highest total in tournament’s history. The highest total is still held by New Zealand, who had posted 347 for 4 in 50 overs against USA in 2004. This is also the third-highest score by a team against India in a tournament final. The earlier two scores are held by Australia (ICC World Cup 2003 final and Tri-Nation series in 2004: they scored 359 in each occasion).

Batting first, Pakistan kept India on the mat courtesy blistering shots and a mammoth first-wicket stand. Azhar Ali and Fakhar Zaman put on a 128-run stand inside 23 overs. Azhar brought up consecutive fifty in the tournament whereas Zaman fancied his chances after getting a reprieve on 3. He was dismissed off Jasprit Bumrah’s delivery, but a no-ball ensured a longer stay for him. Zaman took off from there and blasted the Indian spinners, Ravichandran Ashwin and Ravindra Jadeja, to register three figures at The Oval, London.

If India weather the storm and chase 339, this is be a record chase by the defending champions in any ICC ODI tournament final. 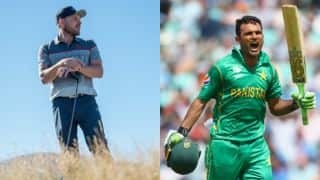