Misbah-ul-Haq struck his fourth half-century of the series to guide Pakistan to a four-wicket win in the fifth and final One-Day International (ODI) match against West Indies and seal the series 3-1 at Gros Islet on Wednesday. 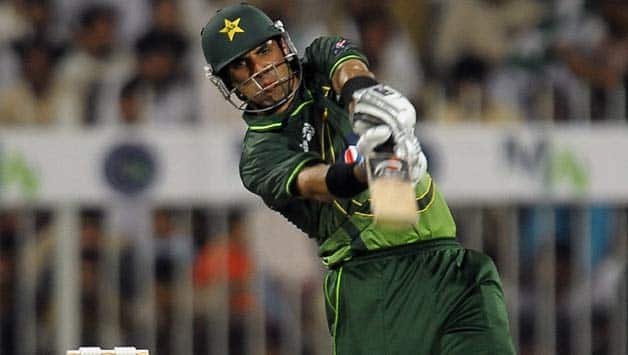 Misbah-ul-Haq struck his fourth half-century of the series to guide Pakistan to a four-wicket win in the fifth and final One-Day International (ODI) match against West Indies and seal the series 3-1 at Gros Islet on Wednesday.

Needing 243 to win, Pakistan started on a good note putting a 50-run partnership for the opening wicket in 10 overs. However, Pakistan were rocked back with two wickets in six overs. Although the scoring rate dropped, Pakistan were looking secured as Ahmed Shehzad showed composure in the company of skipper Misbah, who batted in a characteristic fashion without taking undue risks. They put on a solid 59-run partnership for the third wicket before Shehzad departed for a well made 100-ball 64.

The skipper continued to hold the fort till the last over as the players at the other end became aggressors. Umar Akmal, particularly, treated the West Indian bowlers with disdain, hitting five boundaries and a six.

However, Pakistan were still not out of danger with 17 runs needed off 14 deliveries when Shahid Afridi walked out to bat. He bailed the team out with a quickfire 13.

Tino Best was the pick of the bowlers for the hosts as they failed to defend a competitive total against a side that has been finding it tough to deal with its batting woes.

Earlier, after winning the toss, Pakistan elected to field first. In an unusual move West Indies chose to open withJohnson Charles and Devon Smith. However, the move didn’t work as Junaid dismissed Smith for just seven. The hosts adopted a cautious approach in the initial overs and played without taking too many risks.

However, Pakistani bowlers struck at regular intervals and ensured that the hosts didn’t form a strong partnership.

Gayle came out to bat at number five in the order. He seemed to have developed a stable partnership with Marlon Samuels till the time he mishit a pull to a short-pitched delivery by Junaid, which was brilliantly taken by Umar Akmal.

Skipper Dwayne Bravo raised the tempo of a rather stuttering and slow West Indian innings by smashing five fours and three sixes towards the final overs to guide them to a competitive total.

Apart from Junaid, the tall Mohammad Irfan also troubled the West Indian batsman and ended with figures of two for 34 in his 10 overs.