Under an overcast sky, Zimbabwe struggled to come to grips with a nippy attack exploiting the conditions. Their tale of woe started as early as the fifth ball of the innings, which Brendan Taylor tickled through to Kamran Akmal behind the stumps. 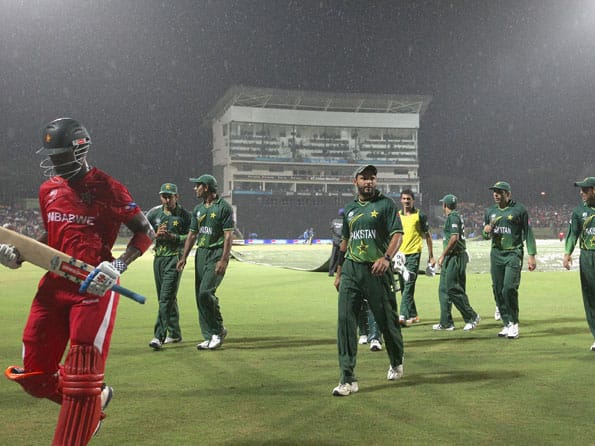 Pakitan players coming off the field after rain interrupted for the second time.

Choosing to bat first on a sluggish pitch under a grey cloud covering, Zimbabwe were stumbled to 151 for 7 in between two rain delays, the first during the 28th over and the second in the 40th. An hour-and-39-minute rain delay meant Zimbabwe s innings was restricted to 43 overs, but seven wicket was as far as Pakistan could go as the weather played spoilsport again. Per the Duckworth-Lewis ruling, Pakistan will now chase 162 in 38 overs.

Under an overcast sky, Zimbabwe struggled to come to grips with a nippy attack exploiting the conditions. Their tale of woe started as early as the fifth ball of the innings, which Brendan Taylor tickled through to Kamran Akmal behind the stumps. Regis Chakabva was rapped on the pads and gone for 0, while Gul extracted a leaden-footed Vusi Sibanda with one that left him a shade, and the outside edge was smartly held by Misbah-ul-Haq at first slip.

Tatenda Taibu, who had a few nervous prods at Gul, didn t last around very long either. Wahab Riaz set him up with a short one, which pinged his gloves, and the next ball was full and wide and Taibu picked out mid-off. Much rested on Greg Lamb, but he made just 16 before popping a googly back to Shahid Afridi. In just the 24th over, Zimbabwe were floundering at 84 for five and readying themselves for an early finish.

Gul was excellent in his opening burst (4-1-13-2) while Razzaq turned in a controlling spell (7-1-24-1), and should have had a second expect the an outer edge fell agonizingly short of slip. Craig Ervine, who nudged and pushed the ball around while scampering singles, tried to rebuild the innings. Ervine resisted stubbornly until the rain came, and upon resumption raised his fifty. However, after all the hard work he paid the price for a lapse of concentration and was bowled through the gate by Mohammad Hafeez.

Elton Chigumbura and Prosper Utseya then added 48, taking the score to the respectability of 150 before a loose pull shot signalled another wobble. Utseya flayed at a short one from Gul and the ball flew off the splice to Kamran running around towards square leg (151 for seven).

That was promptly followed by rain returning, and a revised target for Pakistan.