Openers Mohammed Hafeez and Nasir Jamshed cracked sparkling centuries as Pakistan piled up a mammoth 329 for six against India in their high-voltage league match of the Asia Cup cricket tournament. 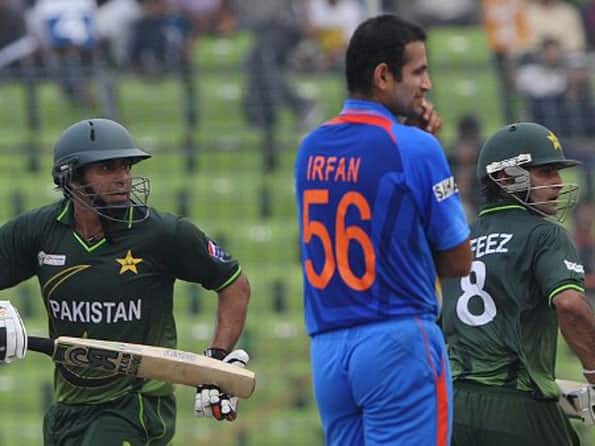 Openers Mohammed Hafeez and Nasir Jamshed cracked sparkling centuries as Pakistan piled up a mammoth 329 for six against India in their high-voltage league match of the Asia Cup cricket tournament.

Both Hafeez (105) and Jamshed (112) stitched a record 224-run opening partnership to lay the foundation as the Indian attack wore a pedestrian look throughout the innings while below par fielding in the initial part only added to the woes.

The opening stand is Pakistan’s highest against India eclipsing Saeed Anwar and Aamer Sohail’s opening stand of 144 in Singapore, back in 1996.

Pakistan skipper Misbah-ul Haq won the toss and his decision to bat was vindicated by the openers who didn’t put a foot wrong during their partnership. They never took any undue risks yet hit boundaries at will while keeping the scorers busy with singles and twos.

Hafeez was the first to get off the blocks with a square cut off Praveen Kumar’s bowling in the very first over.

Young Jamshed then took the cue and hit Praveen for three boundaries in the third over and Pakistan never looked back since then.

The 50 of the innings came in the 10th over and 100 in the 18th over as Dhoni’s bowlers looked clueless in the wake of the onslaught.

While Praveen’s lack of pace on a slow pitch became his undoing, Irfan time and again drifted on the pads as both Jamshed and Hafeez gleefully kept clipping those deliveries at will.

The only chance during the phase came when Jamshed misjudged a flighted delivery from Tendulkar as he committed to the stroke a bit early. The ball came at great speed and bounced off Tendulkar’s palms as he injured a finger in the process. Jamshed was on 69 then.

After that, the batsmen hardly took any risks as they went about doing their job in a thoroughly professional manner.

Hafeez reached his fourth ODI hundred pushing Praveen to mid-off and scampering home for a quick single. The 200 also came up in the same over — 33rd of the innings. He hit nine fours and a six in the process.

In the 35th over, Jamshed completed his maiden ODI ton pushing Praveen towards mid-wicket. He reached his ton off 98 balls with nine hits to the fence. After reaching his century, the southpaw lifted Praveen over deep square leg.

When Jamshed was finally dismissed by Ashwin in the 36th over, the pair were four runs short of equalling the highest-ever opening stand of 228 for Pakistan recorded by Imran Farhat and Hafeez in Harare, back in 2011.

Jamshed went for a slog sweep only to top-edge at short third-man where Irfan latched onto the ball on second attempt.

Ashok Dinda who bowled a good first four overs finally got a wicket as Hafeez missed his slower delivery and was rapped on the pads. Hafeez had nine fours and six in his 113 ball knock.

Younis scored a quickfire 50 off 33 balls before a stunning one-handed catch by Raina saw his back. The score could have reached 350 but Indian bowlers restricted them in the slog overs.

The Indian bowling, which has copped a lot of flak in recent times, could not put up an improved show as most of the bowlers couldn’t stick to one line.

Praveen was the most expensive bowler with figures of two for 77 in 10 overs while Irfan was not far behind giving away one for 69 in his full quota of overs.

Dinda was the only saving grace among the pacers as he gave away 47 in eight overs getting two wickets in the process. Ashwin’s poor form continued as he went for 56 in his 10 overs.(PTI)