West Indies have a herculean task to chase the target in hand as they have never chased a total in excess of 300.

Azhar Ali and Babar Azam‘s ton led Pakistan to a huge score of 337 for 5 in 50 overs versus West Indies in the third and final One-Day International (ODI) match. Batting first, Pakistan began well with their openers Azhar and Sharjeel Khan. Skipper Azhar looked in good nick from the start of the innings and went past double figures in second over of the match, which he missed to do that in first two ODIs. On the other end, Sharjeel started his batting in his own style with some boundaries and in first five overs of the match, they were scoring above eight runs per over. West Indies captain Jason Holder had to introduce his part time spinner Kraigg Brathwaite in fifth over as opening pacers Shannon Gabriel and Alzarri Joseph were leaking runs at brisk rate. FULL CRICKET SCORECARD: Pakistan vs West Indies, third ODI at Abu Dhabi

Skipper Holder introduced himself in action as well in the sixth over of the innings but couldn’t control the scoring rate as Pakistan completed fifty runs in just six overs without losing any wicket. This was the first fifty-run stand between Azhar and Sharjeel. Further, Holder and Brathwaite continues to bowl together and tried to slow down the run-rate a bit. The scoring rate of Pakistan did go down but it remains above six after first 10 overs. Holder brought another bowling change in the 12th over of the match by introducing his main spinners Sunil Narine and Sulieman Benn. Narine conceded only three runs from his first over, which was also the first over of match in which Pakistan scored less than six.

Similary, Benn also did well in his first over by leaking only five runs. The bowling change proved a bit useful for West Indies as they got their first wicket in the form of Sharjeel off the first ball of 15th over, bowled by Benn. Sharjeel did miss another fifty by getting out on 38 but ensured a good start, which Pakistan needed. After that, in form batsman Babar Azam joins the crease, who scored hundreds in last two ODIs against West Indies. Azam need to score another century to become third Pakistani batsman after Zaheer Abbas and Saeed Anwar to make three consecutive hundreds in ODIs. ALSO READ: Pak vs WI LIVE Streaming: Watch PAK vs WI 3rd ODI Live telecast & TV Coverage

Azam began his batting slowly but cleared his intention with a six to Benn in the 20th over, in which Pakistan skipper completed another fifty of his career. Soon, Azam made another record by becoming highest run scorer from Pakistan in a three match ODI series by beating Javed Miandad’s tally of 252 runs in the 1987 Texaco Trophy against England.

So far, after half of Pakistan’s batting innings, with only one wicket lost, the flow of runs was gone down a bit but the scoring rate was still around six and credit goes to the Caribbean spinners for that. Meanwhile, there was some classy shots played by skipper Azhar and Azam as both were settled in the crease and looking for another huge total for Pakistan.

In between, Azam too completed his fifty, while Azhar enters into his 80s. Also, few catching chances missed by West Indies fielders and bowlers looked clueless because of not getting wickets. Azhar took a bit time to move from 90 to 100 but completed his third century and became first Pakistan captain to to hit three centuries as captain in ODIs.

Just after Azhar’s century, Holder strikes by taking his wicket and then Pakistan’s senior most batsman Shoaib Malik joins Azam at the crease. Azhar’s wicket fell at the score of 232 in 38th over and from there; a huge total for Pakistan was quite evident but soon Malik departs over and Vice-captain Sarfraz Ahmed joins Azam. Pakistan enters the slog overs with one set batsman and an experience in the form of Azam and Sarfraz. ALSO READ: Babar Azam scores 3rd consecutive ODI hundred against West Indies; Twitterati hail his effort

Azam gets his hundred with a single off Narine, followed with a punch in the air while celebrating. He became third Pakistani batsman to score three consecutive hundreds in ODIs. Azam also became second batsman to score three back-to-back hundreds in a three match ODI series after Quinton de Kock, who did the same against India in December 2013. This was probably better of all of his three hundreds as it came with the strike rate of above 100, while previous two came with below 100 strike rate.

After 45 over, Pakistan’s score was 272 and from there on, 350 was expected but soon Azam and Rizwan both got out in next two overs. Imad Wasim came into scene but couldn’t do much as he went back to pavilion in the 49th over after scoring only four. In the end, Sarfraz remained unbeaten after making 24 with Pakistan posting the total of 308 for six. West Indies has never chased any total of above 300 in ODIs and looks like this is going to be another loss for them. 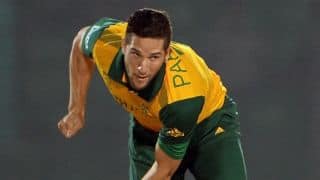