Pakistan trail Sri Lanka by 343 runs in the first innings of the third Test at Sharjah.

Pakistan progressed slowly to 85 for no loss at lunch on Day Three of the third and final Test against Sri Lanka in Sharjah on Saturday.

Openers Khurram Manzoor (41) and Ahmed Shehzad (42) were extra cautious as they added only 66 runs in the two-hour session after resuming at 19 for no loss on a flat pitch.

Pakistan need another 143 runs to avoid follow-on after Sri Lanka mustered 428 for nine declared in their first innings. They trail by 343 runs.

Pakistan are trailing 1-0 in the three-match series after losing the second Test in Dubai by nine wickets. The first Test ended in a draw in Abu Dhabi.

Khurram, who scored 73 in the second Test, hit four boundaries and looked more inclined to go for shots as Sri Lanka’s pace and spin attack made runs hard to come by.

Shehzad, whose place was in danger after two failures in Dubai, was more cautious against left-arm spinner Rangana Herath, hitting four boundaries during his knock. 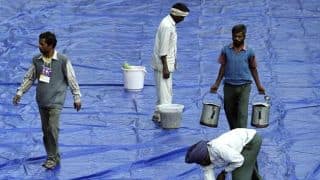