Needing 7 off the last over, Quetta skipper Sarfraz Ahmed handed the ball to Nawaz to bowl the crucial final over of the game who had leaked 45 runs in his previous 3 overs.

Mohammad Nawaz kept hold of his nerves in the final over to concede just 5 runs out of required 7 against Peshawar Zalmi to see his side Quetta Gladiators pull off a nail-biting emphatic win in the 1st Qualifier of the ongoing Pakistan Super League (PSL) 2017. Needing 7 off the last over, Quetta skipper Sarfraz Ahmed handed the ball to Nawaz to bowl the crucial final over of the game who had leaked 45 runs in his previous 3 overs. But Nawaz kept calm in the high-octane situation to make sure of his teams place in the finals of the second edition of this Twenty20 league from Pakistan.

Opting to bowl first, the Zalmi s had a dreadful start. Quetta opener Ahmed Shehzad and No. 3 Kevin Pietersen bludgeoned off the strong Peshawar bowling attack to pieces early on. The only respite the Zalm s got was the wicket of English batsman Luke Wright who played his first PSL game this season. Wright (12) was dismissed early in the game by Hasan Ali. When Wright departed, Quetta had 31 runs on the board. Pietersen walked in to accompany Shehzad who was already on the attacking mode.

Both these hammered every ball put against them. Whether the ball was pitched full, short, on good length, it was dispatched to or beyond the boundary rope. The way these two ere batting along, Quetta were hoping for a target in the region of 220-230. But Peshawar skipper Darren Sammy got the much-needed breakthrough on the last ball of his first and innings 10th over by getting rid of dangerous looking Shehzad (71 off 38). This also saw an end to 90 runs stand for the second wicket in just 7 overs.

Before Gladiators could again start scoring runs in a flurry, Pietersen (40 off 22) too departed leaving his team in a little spot of bother. Suddenly Quetta Gladiators found themselves with 2 new batsmen at the crease with 132 runs on the board. Captain Sarfraz tried to up the ante along with Rilee Rossouw, but the Zalmi bowlers capitalised on this situation of having two new batsmen at the crease.

They mixed up their bowling well and Sammy kept shuffling his bowlers regularly keeping the batsmen guessing. Small contributions from Rossouw (17 off 18), Sarfraz (17 off 20) Anwar Ali (20 off 10), Saad Nasim (9 off 4) helped the Gladiators eventually reach the total of exact 200 in the 20 overs.

When Peshawar Zalmi began their run-chase, the target was big enough, but with the amount of quality they had in their XI, they looked well capable of it.

But the situation turned bad for them in the second over. Zulfiqar Babar removed Kamran Akmal (1 off 7). Before they could gather themselves up from Akmal s loss Marlon Samuels (1 off 3) was involved in a terrible mix-up the same over to get run-out. Suddenly Peshawar Zalmi s were tottering at 3 for 2 in 2 overs chasing a huge target of 201. But Mohammad Hafeez who walked in at No. 4 played sensible cricket along with opener Dawid Malan who was trying to ease himself into the game. Both Malan and Hafeez played out some few overs responsibly to see off the tough spells from the Gladiator quicks.

Once they got themselves set into the game, but decided to go all guns blazing against Quetta spin attack; primarily attacking Nawaz. They belted every bowler that was put against them and scored runs in a furry.

Hafeez took the lead role in this partnership taking the maximum strike and going gung-ho. Malan made sure of making the best of every opportunity he got by scoring boundaries and sixes. But it was on the fifth delivery of 13th over, that Nawaz successfully duped Hafeez (77 off 47) ending a dangerous partnership of 139-runs in just 12 overs.

Shahid Afridi, who was in good nick in the last group stage, resumed from where he left and went rocketing huge sixes to get the required run-rate under grab. Malan (56 off 30) lost his wicket at the other end, but despite this, Afridi continued barraging Gladiators bowling attack. Once Malan departed, Afridi lost Haris Sohail (6 off 6) quickly.

With 5 wickets down, Peshawar still needed 27 runs off 20 deliveries. But the Zalmi s had Afridi wrecking havoc at one end while their skipper Sammy at the other, which assured them an emphatic victory. Afridi playing by usual instincts cleared the rope 2-3 time to bring the required run-rate below six. But he tried finishing the game early and was dismissed on the 5th delivery of the penultimate over.

With the last over remaining, Sammy was on strike with 7 needed. Sammy rejected to take a single as he had his pacer Chris Jordan on strike. But Sammy got a thick outside edge which fell just short off Tymal Mills at short third man. Mills tried to pull back the ball but parried it over the boundary rope. The equation read 2 off 3 as Sammy rotated the strike the next ball.

But Nawaz bowled excellent full length darted deliveries onto the stumps which saw Jordan (0) edging it to Sarfraz followed by Wahab Riaz and Hasan Ali getting run-out losing the game by a run.

Quetta Gladiators finally made their way through to the final of the second edition of PSL which will be held in Lahore.

Identically both teams had met each other in the same fixture of the inaugural PSL edition wherein too, the Quetta Gladiators won by a run defending 8 runs of the last over.

Peshawar Zalmi do have a game left to make their chances count. They will have to win the eliminator against the winner of the 2nd Qualifier between Islamabad United and Karachi Kings which will held on March 1.

Man of the Match: Ahmed Shehzad 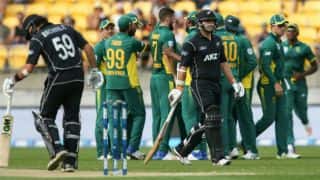