A d j vu fixture is set to take place in the ongoing Pakistan Super League (PSL) 2017. The defending champions, Islamabad United, will take on Karachi Kings in the second qualifier.

A d j vu fixture is set to take place in the ongoing Pakistan Super League (PSL) 2017. The defending champions, Islamabad United, will take on Karachi Kings in the second qualifier at the Sharjah Cricket Association Stadium, Sharjah on Wednesday night. The last time these two played against each other was the last fixture of the group stage this season, wherein the Kumar Sangakkara-led side emerged victorious by 6 wickets. But this second qualifier is a different ball game. The team ending on the losing side will be out of the competition, whereas the winning side will play against Peshawar Zalmi, who lost the first qualifier by one run against Quetta Gladiators just the previous day.

Fortunes have been different for both teams this season. The Islamabad United started off the tournament as the defending champions and lost the momentum in between. They pulled up their socks towards the ending stage of the first round to make it to the qualifiers. Karachi Kings, on the other hand, had a disastrous start to losing their first three games. The situation looked very bleak for the Kings who were touted as the strongest side on paper before the tournament began. The memories of last season s second Qualifier would be fresh in the minds of both the competing sides. The Misbah-ul-Haq-led side has relied mostly on their skippers shrewd captaincy. Misbah has deployed some of the best tactics using all his experience to lead his team from the front. Once again they will be hoping for Dwayne Smith to carry on with his form that he found in the ending stage of the group matches. Smith is the leading run-scorer in the tournament (266).

Apart from Smith, the only other batsman from United to have played substantial knocks is Shane Watson. The former Australian all-rounder stands 13th in the table of run-scorers, 12 paces below his team companion.

This chasm between the two overseas players is something that has hurt Islamabad United, as the majority of their batsmen have failed to contribute. Despite having experienced batsmen at their service such as wicketkeeper-batsman Brad Haddin, Hussain Talat and even Misbah, Islamabad United have simply not been up to the mark.

However, the standout element for Islamabad United has been the presence of some exceptional bowlers in their squad; and all comprise of local players.

Shadab Khan, Mohammad Sami, Rumman Raees, Saeed Ajmal and Mohammad Irfan have all put in their best which has propelled their team at this stage. The onus will be especially on Sami, who has spearheaded the United pace attack with 10 wickets, standing third in the overall tally. Watson, too, has taken his wicket tally to 8.

Ben Duckett has been replaced by wicketkeeper-batsman Nicholas Pooran, as the former has been recalled by England Cricket Board (ECB) to play for Under-21s.

As for the Karachi Kings, Babar Azam has been the driving force. Karachi Kings have the best side on paper due to the abundance of attacking players they boast in their squad. Babar is the second highest run-scorer (265), just one run behind Smith. Sangakkara, who looked far off from being at his best, regained the lost momentum and has scored runs on a consistent basis. Shoaib Malik, Kieron Pollard, Ravi Bopara have been amongst the runs, but more is desired off them.

Chris Gayle s form remained a worry for the Karachi Kings for a very long time. Gayle, who was added to Kings squad this season, was struggling for runs. However, Karachi Kings persisted with Gayle and the swashbuckling West Indian opener blasted off United bowlers in their last meeting, scoring 44 of just 17 deliveries.

Karachi Kings perhaps have the best pace bowling attack. Mohammad Aamer, Sohail Khan, Imad Wasim and Usman Khan form a dangerous bowling attack, Sohail is the leading wicket-taker in this season with 14 scalps in his kitty, and he will have the responsibility of carrying his performance from the group stages to the knockout stage of the tournament.

There are not any changes expected to be made in Kings team at least for this fixture. 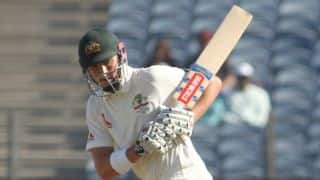