Bilal Asif was awarded the Man of the Match for his maiden five-wicket haul in ODIs.

Pakistan beat Zimbabwe by seven wickets in the third and final One-Day International (ODI) between Pakistan and Zimbabwe at the Harare Sports Club, Harare. The three-match series was tied at 1-1 coming into the series decider, Zimbabwe started well but once Bilal Asif struck to dismiss Chamu Chibhabha he never looked back taking 5 for 25 as Pakistan bowled out Zimbabwe for a moderate total of 161. In their chase, it was Asif again who was too much to handle for Zimbabwe as he backed up his maiden five-wicket haul in one-dayers with a quick cameo of 38 to set up the platform. Zimbabwe struck back with few wickets but Shoaib Malik’s calm head ensured Pakistan won the game and the series 2-1. CRICKET SCORECARD: Zimbabwe vs Pakistan 2015, 3rd ODI at Harare

Zimbabwe were again halted by their inability to play good spin bowling. Imad Wasim had troubled them in the Twenty20 Internationals (T20Is), Yasir Shah had them in a spin in the first one-dayer and now Bilal had them struggling for survival. With the ball, the pacers did not start well but the spinners did not let Pakistan get away with the game. Cricket updates: Zimbabwe vs Pakistan, 3rd ODI at Harare

Asif though was always going after the Zimbabwe bowlers and he along with Ahmed Shehzad. It took a brilliant catch from Tino Mutombodzi  at long on to get rid of the top performer for Pakistan for 38. Hafeez did not last long and was caught down the leg side. Shehzad, trying to accelerate the scoring but fell to the bowling of Sean Williams. Malik came in and was urgent in his approach his knock of sealed the game and series for Pakistan.

Zimbabwe will rue the way they batted in the game, from being 100 for the loss of one wicket, they were bowled out for 161— losing nine wickets for just 61 runs. It was the brilliant start from Chamu Chibhabha and Richmond Mutumbami that set the tone for the hosts. Chibhabha was dismissed for 48, caught and bowled by Bilal Asif and Zimbabwe then kept losing wicket at regular intervals as Richmond Mutumbami registered only his second ODI fifty. Read: Pakistan bowl out Zimbabwe for 161 in 3rd ODI after Bilal Asif’s 5/25

It was Pakistan won the toss and inserted Zimbabwe into bat. They for some reason dropped Yasir Shah for Imad Wasim. Azhar Ali suffered from foot infection and was replaced by Ahmed Shehzad with Sarfraz Ahmed leading the side. Zimbabwe too made a couple of changes, bringing in Malcom Waller and Tino Mutombodzi for the injured Graeme Cremer and Hamilton Masakadza.

Man of the Match: Bilal Asif

Man of the series: Shoaib Malik 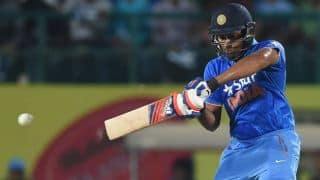