Wood had been taking painkiller injections in the past to heal from his ankle injury.

England fast bowler Mark Wood, who has had issues with his left ankle since some time now and is currently out of the England Test squad feels that he is recovering well. Wood feels that he will be up and ready for the First Test at Lord’s against Pakistan. Pakistan‘s tour of England begins on July 14. Woods, who has had ankle pain in the past as well, was ruled out of the England squad which faced Sri Lanka at home. Wood’s had consulted a specialist in Netherlands after he felt pain while playing for his county side Durham in the pre-season. ALSO READ: Mark Wood undergoes 2nd operation in 5 months

A hopeful and positive-looking Wood said – “It’s coming along nicely, I’m a month ahead of schedule,” as quoted by Sky Sports on Thursday (June 2). “I was originally meant to be back at the end of July, now I’m looking to play again by the end of June. I’m pleased with the progress, it’s just a shame that I’ve missed the first part of the season but I’m hoping for a big bang in the second part of the season,” he added. ALSO READ: Dwayne Bravo, Mark Wood unhappy with ICC’s two-tier proposal for Test cricket

England, meanwhile have done well. They beat the visitors Sri Lanka in the first two Tests at Headingley and Chester-le Street quite convincingly. The pace bowlers especially James Anderson was at his lethal best. Stuart Broad, Chris Woakes and Steven Finn did well too. Wood therefore might find it difficult to make it to the Playing XI. He felt he’ll have to earn his place in the side. “They’re doing pretty well at the minute so it’ll be hard to get back in. England are doing really well so I’m going to have to pull out all the stops to get back in, “said Wood.

The right-armer who also watched the Second Test that his side played against the Lankans, was feeling restless to make an impact, but could not. “It’s definitely worse watching because you can’t affect the game but now I’m hoping to put that behind me and this month crack on with playing some games for Durham. Then if I do well for Durham then I’m looking to get back into that England side,” said Wood. 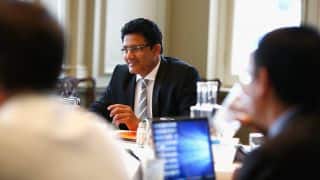