Pakistan‘s head coach Waqar Younis on Wednesday raised hopes his team will fare better in the upcoming Tests against Australia after suffering a 3-0 whitewash in the recent one-dayers. The countries are now preparing for a two-match Test series which starts with the first Test in Dubai from October 22, and the 42-year-old Waqar, appointed in May this year, said good things will come in the five-day format.

“I am hoping for something good to happen in the Tests,” Waqar told AFP. “It’s a different ball game and we have experience back in the side with Younis Khan and Azhar Ali, so I am hoping that we start delivering now.” Pakistan face another tough challenge against an Australia side they have not beaten since a 1-0 win at home in 1994, when Waqar took seven wickets in the victory in Karachi.

After that, Pakistan lost 13 straight Tests against the Australians — three in 1999 in Australia, three on neutral ground in Sri Lanka and the United Arab Emirates in 2002, three each in Australia in 2004 and 2010 and then when they clashed at Lord’s in 2010. They did recover to win in Leeds later that summer, but Waqar admitted Australia are tough to beat.

“Look, you have got to think that they are the number one team, their system is just so good that they produce good cricketers, (but) we would love to win the series with a positive frame of mind,” said Waqar. Waqar believed moving forward from the absence of ace spinner Saeed Ajmal — suspended because of an illegal bowling action last month — will take some time.

“It’s going to be hard and its going to take a little time. It’s a big hole when Ajmal is not there when you are playing on slow and dry pitches here. It’s going to take time but I am sure the youngsters will come good,” said Waqar, who showed disappointment at losing the one-day series. “In a way I am diappointed, we could have won a couple of games out of those but unfortunately we couldn’t finish. We clearly showed that we have some inexperience — we could have done much much better in certain areas,” he said.

“But I am honestly pretty happy with the youngsters. I think we are building into a very fine side, the talent is there and it’s a matter of time. Before the one-day series we lost a couple of players, like (Mohammad) Hafeez, Wahab Riaz and then Junaid (Khan) through injuries, but I am pretty hopeful and very confident that before going into the New Zealand series and the World Cup in 2015 we will be able to put up a very fine side.”

The second Test will be played in Abu Dhabi from October 30. That will be followed by three Tests, five one-day internationals and two Twenty20s against New Zealand in November-December in the United Arab Emirates. Shane Watson itching to come back after 'longest break' 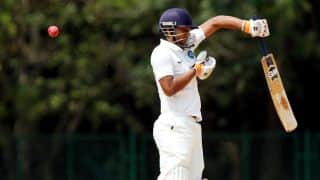