Time for younger brother Mitchell Marsh to make impact for Australia in Tests after brother Shaun.

Australian all-rounder Mitchell Marsh said it would be a dream come true if he made his Test debut against Pakistan on the UAE tour next month. Marsh though is aware about the presence of a senior player like Shane Watson who will surely be Australia’s first-choice all-rounder for Tests.

“We all know that Shane Watson’s the first picked all-rounder in Australia, and he’s a world-class player. The biggest thing for me is just being around him, working with him on and off the field. He’s been a great help for me. I’m excited about what’s to come. If I get a crack in Dubai, hopefully I can take my opportunity. It would be a dream come true,” Marsh was quoted as saying by the official website of Cricket Australia.

Marsh’s selection for Tests came at the back of some impressive performances for the One-Day International (ODI) team on his debut tournament in the Zimbabwe Triangular series.

Though these are exciting times for the youngster, he needs to catch up with the hectic schedule and keep himself fit. The all-rounder will be playing the Champions League T20 for the Perth Scorchers and will have to fly back for the limited overs series against Pakistan followed by the Tests.

“It’s a lot of time away from home, but I wouldn’t change it for anything. I’m loving every minute of it,”said the all-rounder. 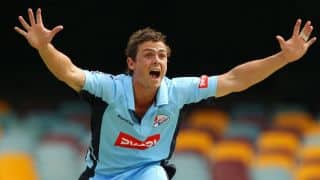