Glenn Maxwell knocked three sixes and nine boundaries in his 98 off 82 balls to lift Australia -- sent into bat by Pakistan -- from 140-5 to an imposing total of 277.

Glenn Maxwell missed a fighting hundred by two runs but still guided Australia to 277-7 in the fourth one-day international against an injury-hit Pakistan in Dubai on Friday.

The dashing middle-order batsman knocked three sixes and nine boundaries in his 98 off 82 balls to lift Australia — sent into bat by Pakistan — from 140-5 to an imposing total on a slow Dubai stadium pitch. (Pakistan vs Australia, 4th ODI: LIVE UPDATES)

A new look Pakistan team — with Imad Wasim as skipper after Shoaib Malik was ruled out with a rib injury — had caught Australia napping at 101-4 when Maxwell walked in.

He repaired the innings with a 134-run partnership for the sixth with Alex Carey who finished with 67-ball 55 for his maiden fifty with three boundaries.

Maxell, bowled by fast bowler Usman Shinwari off a no-ball when on 76, was within a stroke of his second ODI hundred when he was run out while attempting a double run.

Carey supplemented Maxwell well, as the pair beat the previous sixth wicket stand in Australia-Pakistan ODIs of 90 between Dirk Wellham and Rod Marsh at Sydney in 1981.

Australia, who have already won the five-match series 3-0, brought in fast bowlers Kane Richardson and Nathan Coulter-Nile in place of Pat Cummins and Jason Behrendorff.

The last match will also be played in Dubai on March 31. 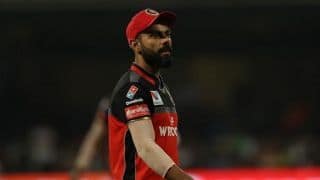 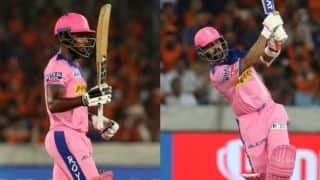