David Warner blasted off the strong Pakistan pace attack to get to his 23rd Test fifty and also surpassing Ricky Ponting to become the sixth-fastest Australian to surpass 5,000 runs.

Josh Hazlewood and Jackson Bird got 3 wickets each before Pakistan declared their innings. Australia started off their innings well with opener Matthew Renshaw and Warner counterattacked the Pakistan pacers. But Renshaw was soon dismissed by Yasir Shah for 10. Warner then cut loose and has been playing at a strike rate of 90 with Usman Khawaja at the other end. With the first two days of the game tormented by rain, the fate of this match is likely to be decided by the end of Day Three s play.

With two more days to go, Australia would look to take a lead and seal the series 2-0. 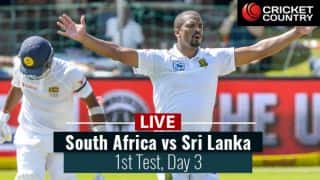