After loss to New Zealand, Pakistan skipper Shahid Afridi had hinted retirement at the end of World T20.

Pakistan and Australia lock horns in a must-win encounter for both the sides at Mohali on Friday. It is the 26th match of the tournament and Group 2 clash. Australia have a win and loss from their two matches so far in the World T20, while Pakistan have managed to register just one win which had come in their opening fixture against Bangladesh. That win was followed by consecutive losses at the hands of India and New Zealand which have diminished or rather ended their hopes of going through in the knock-out stage. Australia will have one game left after Friday’s game and they are set to take on India in the same venue on Sunday. LIVE  CRICKET SCORECARD: Pakistan vs Australia, Match 26, Super 10 stage, ICC World T20 2016 at Mohali

Pakistan were replaced by India at the second spot in the T20 World Cup 2016 points table when the tournament hosts trumped Bangladesh by one run in a thriller, but still, Pakistan can move up with their Net Run Rate being better than India’s. After three games each, India have 4 points and a NRR of -0.54, whereas Pakistan have 2 points and +0.25 as their NRR.

After loss to New Zealand, Pakistan skipper Shahid Afridi had hinted retirement at the end of World T20 and this has now become of the major reasons for Pakistan to triumph in this match and keep their chances alive while they will hope India will lose their final match against Australia. That will see Pakistan go through due to their better Net Run Rate. Live Cricket Score Pakistan vs Australia, ICC T20 World Cup 2016 PAK vs AUS, 26th T20 Match at Mohali

Everybody knows this is Lala’s last World Cup. I respect him like I respect Inzamam bhai, Waqar bhai, wasim bhai. He is like an elder brother. I have learned a lot from him. Nobody will be happier than me if Pakistan win this World Cup for him,” Shoaib Malik told ESPNCricinfo ahead of their match against Australia. 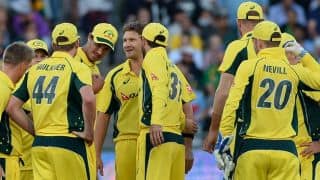