Abbas claimed 5/62 on the fourth day of the second Test as Australia were crushed, taking his tally for the match to 10/95.

Pakistan s Mohammad Abbas has become the most successful bowler in a two-Test series in the UAE, as well as the first fast bowler to claim ten wickets in a Test in the country, while leading Pakistan to a 373-run win over Australia in Abu Dhabi on Friday.

Abbas claimed 5/62 on the fourth day of the second Test as Australia were crushed, taking his tally for the match to 10/95. His tenth wicket of the match made history and took his series tally to 17 at an outstanding average of 10.58 each and at a strike-rate of 26.7 to surpass the 16 that Shane Warne, Rangana Herath and Yasir Shah managed earlier.

The 28-year-old claimed seven wickets in the drawn first Test in Dubai and in Abu Dhabi drew level with Waqar Younis, Mohammad Asif and Shabbir Ahmed as the fastest Pakistan pacers to 50 Test wickets. The previous best returns by a fast bowler in a Test in the UAE was eight by Pakistan left-armer Junaid Khan against Sri Lanka in 2013.

This is a very special day for me, a day after my daughter s birthday and I dedicate this performance to her, said Abbas after the being named Man of the Match and Man of the Series. I am pleased with my performance and I hope to continue this kind of bowling in the future.

Warne had taken 16 wickets in two Tests against Pakistan in the UAE back in 2002, a three-match series which Steve Waugh won 3-0 with the first Test played in Sri Lanka. During the second Test in Sharjah, Warne took 4/11 as Pakistan were bowled out for 59 on day one and then added 4/13 as they were bowled out for 53 to lose by an innings and 198 runs. Australia won the third Test by an innings and 20 runs with Warne taking 8/130 from 51.1 overs.

Overall, the record for most wickets in a Test series in the UAE is Saeed Ajmal s 24 in three matches versus England in 2011-12. 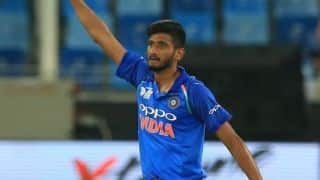 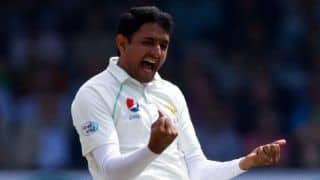