New national selector Ed Smith is due to announce England squad for the first Test on Tuesday.

Jack Leach has broken the thumb on his bowling hand on the eve of England‘s squad selection for the first Test against Pakistan, his county side Somerset announced on Monday. Leach, who impressed on his recent Test debut against New Zealand in Christchurch, took a blow to his thumb while batting in the nets before the final day of Somerset’s County Championship match against Hampshire at Taunton.

After his absence throughout the morning session, Somerset confirmed the nature of the injury via Twitter. “Jack Leach has sustained a broken left thumb. It’s too early to know how long he will be out for at the moment,” the tweet said.

Leach’s likely unavailability for the first Test against Pakistan, which starts at Lord’s on May 24, could mean a reprieve for Moeen Ali.

Off-spinning all-rounder Moeen was dropped for the drawn Test against the Black Caps in March, making room for slow left-armer Leach to make his international debut at the age of 26.

New national selector Ed Smith is due to announce the squad for the first Test on Tuesday. 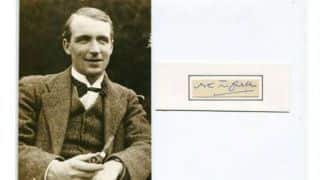