Pakistan took a one nil lead in the three-match Test series against New Zealand.

Pakistan defeated New Zealand by 248 runs in the opening Test of the three-match series at Abu Dhabi on Wednesday. The Kiwis were bowled out after Pakistan had set a mammoth 480 for them to chase. New Zealand looked distinctly looked uncomfortable against both pace and spin. Pakistan took a one nil lead in the three-match Test series. Misbah ul  Haq is now the most successful Pakistan skipper with 15 wins in Test cricket . This has been a terrific comeback for the Pakistanis after their three nil One-Day whitewash at the hands of the Aussies.

The Kiwis had no answer to the Pakistani attack in the second innings . Rahat Ali bowled very well as he scalped two wickets in one over. Yasir Shah too scalped three wickets. New Zealand started in an attacking manner but soon fell away right before tea. They lost a cluster of wickets. Ross Taylor fell at the stroke of tea. He was out leg-before to Yasir Shah for 8. Before that skipper Brendon McCullum was leg-before wicket for 39  off the bowling of Yasir Shah. He was rooted to his crease to a delivery that stayed low and plumb.  Tom Latham was out  to Zulfiqar Babar after was caught by Yasir Shah when he top edged as he was sweeping. Zulfiqar Babar bagged two wickets as well.

After  tea Kane Williamson and Corey Anderson did provide some resistance but when Mohammad Hafeez had Williamson stumped  with an arm ball it opened the floodgates again. Rahat Ali had Jimmy Neesham caught and BJ Watling bowled off successive deliveries. Then Imran Khan trapped Corey Anderson leg-before. The game was as good as over at this point.

Earlier, on Day 4 Pakistan declared their second innings at 175 for two with a lead of 479 in on Day 4 of the opening Test at Abu Dhabi on Wednesday. Mohammad Hafeez  top-scored with 100 not out. He had good support from Younis Khan who made 28 . Before that he shared a 69-run opening stand with Azhar Ali. This is the fifth consecutive time Pakistan  have declared the innings. England hold the record after doing this on six occasions.

New Zealand have a long way to go if they are to compete in this three-match Test series. They were all at sea against the pacers and the spinners. Some of their batsmen such as Ross Taylor looked clueless in both innings against the spinners. His habit of going hard at the ball cost him dear. Brendon McCullum too looked out of place against spin. In the first innings he fell to Babar to a ball that was spinning away. In the second he was rooted to his crease to a ball that stayed from Yasir Shah. Kane Williamson in the second innings did put up some resistance but the manner of his dismissal would have disappointed him. he came down to  Hafeez, played a defensive stoke and completely missed the ball and was stumped.

The Kiwi bowlers too lacked penetration. It was indeed a docile wicket but the fact remains that their bowlers did not look as if they would make an impact. Pacer Southee often drifted down the leg-side which is not something one would expect from. Trent Boult bowled a good line and and length but could not breakthrough. The spinners Mark Craig and Ish Sodhi created chances at times but were lacklustre on the whole. Only Corey Anderson had a bit of an impact with two wickets in the first innings. He mixed it up very well. Another thing that dogged the KIwis in this Test was their fielding. A normally good fielding side they let a few chances go by. BJ Watling missed a stumping in the first innings while Neesham dropped a sitter.

The one positive for New Zealand was Tom Latham’s first innings century. This was his first hundred in Tests. The manner in which he gritted it out was admirable indeed. he played the spinners and the pacers very well.

For Pakistan an heartening aspect apart from their fantastic bowling performance in the second innings was another brilliant batting display. They notched up their third score over 400 runs in their third consecutive Test. Never has a side had its top five batsmen scoring more than 80 but Misbah ul Haq’s side did it in the first innings of this game.

It was Ahmed Shehzad who top-scored for them with 176 in the first innings. He, unfortunately suffered a skull fracture which has ruled him out for six weeks. The opener sustained the fracture after being hit by a Corey Anderson bouncer in the first innings. Shehzad and Hafeez were content to grind it out on the first day of the Test match as they racked up 178 runs for the first wicket.

It was this this 178 run partnership that set in motion the Pakistani batting dominance. Hafeez fell four short of a well-deserved hundred. Perhaps this innings signals a return to form for him.Number three Azhar Ali too contributed with a solid 87.

New Zealand’s troubles on the field did not end after the dismissals of Azhar and Shehzad. Younis Khan and Misbah ul Haq made things worse for them with centuries of their own. This was Younis’ fourth hundred in three Tests. They both looked in fantastic touch and can only add to their good form from here on. Another positive for Pakistan is  Hafeez’s return to form. He brought up his sixth Test hundred and in the second innings. This was a very fluent knock by Hafeez  He stroked the ball beautifully. To add to this he had been very positive, whenever the bad ball came his way he put it away.   In the first innings he fell four short of well-deserved ton. Pakistan have every thing going for them.

For New Zealand before the second Test starts they will have to find a way to combat the Pakistani pacers and spinners otherwise Misbah ul Haq’s men could hand out yet another whitewash.

Man of the Match: Rahat Ali 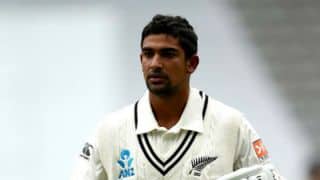