New Zealand won the fifth and final One-Day International (ODI) against Pakistan by 68 runs by dismissing the hosts for a total of 207 in the 44th  over. New Zealand won the series 3-2 as a result, after having drawn the Test and Twenty20 International series by margins of 1-1. Haris Sohail and and Ahmed Shehzad top-scored for the hosts with knocks of 64 and 54 respectively, while the highlight of the New Zealand bowling was Matt Henry, who picked his maiden five-wicket haul while conceding 30 runs in nine overs.

New Zealand managed to outclass Pakistan in every department in the final one-dayer, with the latter never getting a chance to be on top of the game since getting the early dismissal of Martin Guptill early in the New Zealand innings. Chasing a total of 276 to win the ODI series and end the year on a positive note, Pakistan were handed a major blow right at the start of their innings when opener Nasir Jamshed was adjudged leg-before wicket off the bowling of Henry in the very first over, with the hosts losing their first wicket without adding a run to their tally.

The destruction continued for sometime as Henry and Anton Devcich removed Younis Khan and Asad Shafiq without letting them contribute much to the score. At 38 for three, the Pakistanis were headed for a disastrous defeat, with the possibility of getting dismissed under 150 being highly likely given the kind of mood Henry was in. It was then that the pair of Shehzad and Sohail began to tone things down to Pakistan’s advantage.

The two added 69 runs for the fourth wicket, with Shehzad scoring his 13th ODI fifty in the process. The Pakistan opener managed to break a poor form of the bat and justify his spot as an opener. The Shehzad-Sohail stand began to restore the Pakistani hopes back into the game. Shehzad was dismissed however in the 29th over when he ended up spooning a rather simple catch to Kane Williamson at mid-on for the fourth Pakistani wicket to fall. Umar Akmal joined him in the pavilion shortly after, getting caught by Martin Guptill at short mid-wicket off the bowling of Nathan McCullum. At 117 for five, New Zealand seemed to wrested the control of the game once again.

Sohail decided to assume charge from the fall of the fifth wicket, going for the big hits at regular intervals. The bowling all-rounder notched up his second half-century of his ODI career as well as of this series, adding 55 runs for the sixth wicket along with wicket-keeper Sarfraz Ahmed, who kept the run-rate steady on the other end with an occasional boundary or two.

Sohail was finally removed when he attempted to play a delivery towards the off-side, but ended up missing the line of the Mitchell McClenaghan delivery, causing the off-stump to get rattled. Sarfraz joined him in the act a few balls later as Pakistan lost their seventh wicket with 82 runs needed to win. All hope was not lost for the hosts as yet due to the presence of skipper and dashing batsman Shahid Afridi at the crease.

Anwar Ali added a quickfire 18 from 13 balls, that included three boundaries, before getting stumped off the bowling of McCullum. Afridi was the second-last batsman to head back to the pavilion, practically sealing the game for the visitors. Zulfiqar Babar was bowled by Adam Milne to complete the formalities.

New Zealand had earlier finished on a score of 275 for the loss of four wickets at the end of their quota of 50 overs. Ross Taylor and Tom Latham were unbeaten on scores of 88 and 22 respectively, while Mohammad Irfan emerged the pick among the Pakistan bowlers, taking two wickets while conceding 62 runs in his 10-over spell.

The game began with the visitors winning the toss and electing to bat. While New Zealand decided to bring in Anton Devcich and Nathan McCullum in place of Corey Anderson, who has been woefully out of form in the series so far, as well as Daniel Vettori, who had to fly home to attend a wedding. Pakistan decided to replace Mohammad Hafeez and Sohail Tanvir with Asad Shafiq and Zulfiqar Babar. New Zealand decided to surprise everyone when they announced bowling coach and former paceman Shane Bond among their reserve players for the game.

The win will undoubtedly prove to be a major morale-booster for the Kiwis, who have pulled off a series win on foreign soil against a side that had recently whitewashed Australia 2-0 in a Test series. The victory will also help change the perception of the New Zealanders from being the dark horses in the upcoming World Cup to being counted among the favourites. Pakistan, on the other hand, should not head to New Zealand for the upcoming ODI series with a heavy heart. The momentum must be maintained till the onset of the World Cup.

Man of the Match: Matt Henry

Man of the Series: Kane Williamson 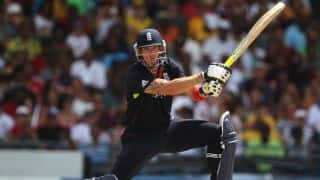