Latham, whose previous best of 83 came against the West Indies earlier this year, hit 13 boundaries.

Tom Latham of New Zealand expressed his delight and relief after the opener scored his maiden Test century against Pakistan on Day 3. “It was little bit of relief as in West Indies I had three half-centuries in a row. It was little bit disappointing not to kick on in. So it was nice to score a ton in the first innings and in the first Test. To achieve that milestone certainly I’m very proud,” he said.

Opener Tom Latham hit a maiden hundred but Pakistan still managed to secure a big lead in their bid to win the first Test against New Zealand in Abu Dhabi on Tuesday.

The left-handed opener scored 103 to defy the Pakistani bowlers as wickets fell from the other end with paceman Rahat Ali (4-22) and spinner Zulfiqar Babar (3-79) wrapping up New Zealand’s first innings at 262.

That gave Pakistan a big 304 run lead and despite their opponents falling 105 runs short of the follow-on mark, the hosts batted again and finished the third day at 15-0.

Mohammad Hafeez (five) and Azhar Ali (nine) were at the crease as Pakistan led by 319 runs with two days left to push for a 1-0 lead in the three-match series.

Pakistan had declared their first innings at 566-3. Pakistan’s regular opener Ahmed Shehzad was earlier ruled out of the remainder of the match and two Tests to follow afer he suffered a skull fracture suffered from a missed bouncer on Monday.

Latham followed his father, Rod, to hit a Test hundred. They became the third New Zealand pair of father-and-son, and the 11th overall, to score Test centuries.

Walter and Richard Hadlee and Ken and Hamish Rutherfod had also done it for the Kiwis in the past. Rod Latham hit his only century against Zimbabwe at Bulawayo in 1992.

Latham kept one end intact as New Zealand recovered from a precarious 47-3 to 215-5 after Babar and Rahat had jolted them in the morning session.

Latham, whose previous best of 83 came against the West Indies earlier this year, hit 13 boundaries during his patient 222-ball knock and added 83 for the fourth wicket with Corey Anderson who made 48. He was finally adjudged leg-before off Rahat and despite a review had to leave the field with New Zealand at 215-6.

BJ Watling (42) and Ish Sodhi (25) furthered the fight through their ninth wicket stand of 43 runs but Yasir Shah bowled Sodhi and Babar had Watling leg-before to end the innings.

After lunch Rahat had Anderson bowled while Jimmy Neesham was stumped off Hafeez for 11. In the morning Babar struck twice to derail New Zealand.

Babar, who took 16 wickets in the 2-0 rout of Australia last week, dismissed Brendon McCullum (18) with a sharp turner for a slip catch and then had Ross Taylor (nought) out in a similar fashion.

In between, Rahat had Kane Williamson (three) bowled off an inside edge to leave New Zealand struggling at 47-3. Resuming at 15-0, the New Zealand batsmen knew they were set for a spin challenge against Babar and Shah.

McCullum survived a confident leg-before appeal against paceman Imran Khan when on 12 and Pakistan’s review against umpire’s decision was also wasted. 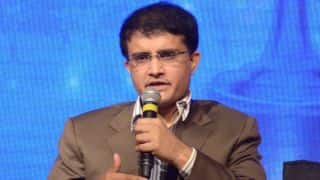