Ferguson on Sunday claimed a career-best 5/45 in the rained out third ODI versus Pakistan in Dubai.

New Zealand fast bowler Lockie Ferguson has doffed his hat at Shane Bond after becoming the latest entrant into the five-wicket club in ODI cricket.

In his 19th match for the Blackcaps, Ferguson on Sunday claimed a career-best 5/45 in the rained out third ODI versus Pakistan in Dubai which saw the series shared 1-1.

The 27-year-old was a member of the New Zealand A squad that camped out in the UAE for a full series with Pakistan A last month, where Bond was coach. Spending quality time with the former New Zealand quick was instrumental in Ferguson assessing the conditions and finishing with 11 wickets in three ODIs. He followed Danny Morrison and Matt Henry as the only New Zealand bowlers to claim five wickets in an ODI in the UAE.

“He’s a bit of a New Zealand hero and my action is a little bit modelled on his, he said. It was great having him as head coach for New Zealand A and had a lot of great chats with him working out different ways to attack batsmen in these conditions where we don’t get the pace and bounce from back home.

Bowling quick and accurately, Ferguson took 11 wickets in three ODIs at an average of 12.81 apiece and his economy rate was 4.80. 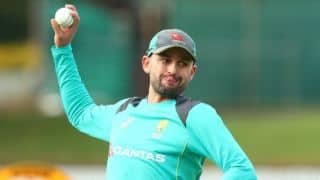