Shan Masood as well as Sami Aslam remained unbeaten on 30 and 31 respectively.

Pakistan retorted strongly as they trailed by 355 at the close of the Day Two of the first Test at Abu Dhabi. Shan Masood and Sami Aslam added an unbeaten 64 to keep Pakistan at bay. The Sri Lankan pacers as well the spin troika found little assistance from a placid pitch. However, Lakshan Sandakan tried to keep the hosts on backfoot with his wrong ‘uns. Masood and Aslam remained unbeaten on 30 and 31 respectively.

Dinesh Chandimal s 155* helped Sri Lanka post a huge total of 419 against Pakistan. They had last crossed the 400-run mark against Bangladesh making 494 in March. After reducing Sri Lanka to 61 for 3, Pakistan were punished as Chandimal s century lifted Sri Lanka spirits. His 155 comprised of 14 boundaries, leaving Pakistan pacers and spinners frustrated.

Chandimal’s century was his first against Pakistan and as captain. He brought it up by driving through cover for four. He achieved this feat off 40 Tests. At this point of his career, Kumar Sangakkara had managed only 5 Test centuries. Chandimal followed it on by bringing up 150 score away from home for the first time.

In the process to his 155, Chandimal added a 134-run stand for fifth wicket with Niroshan Dickwella. The latter brought up his career-best score of 83. The Chandimal-Dickwella partnership was only broken by Hasan Ali. This deprived Dickwella from getting his maiden Test century. Dickwella hit 9 boundaries and a six during his rapid 117-ball stay.

As for the Pakistan bowlers, Yasir Shah ended with 3 for 120 while Mohammad Abbas 3 for 75. 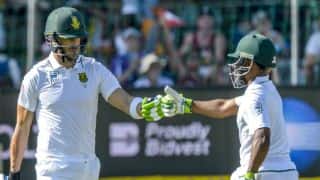