Pakistan continued to pile on runs in the first session of play on day three of the first Test against Sri Lanka. Sri Lanka hardly gave a fight to the hosts batsmen at the Sheikh Zayed Stadium in Abu Dhabi. The pair of Sami Aslam and Shan Masood made merry on flat and placid track making fifties in the process to help hosts cut down deficit by 298. Sri Lanka’s spinner did have the final laugh getting the pair out just before lunch with Pakistan on 121 for 2.

Batting overnight on 30 and 31 runs respectively, Aslam and Masood took control against Sri Lanka s spinners. Masood in particular did not let Lakshan Sandakan settle, while Aslam charged his bat against Dilruwan Perera.

Masood was the first to reach his fifty in 110-balls, his third. Aslam followed soon, reaching his third half-century in 126 balls. They also brought up the 100-run stand in 221 deliveries.

Just when things were looking bleak for Sri Lanka, Perera snapped up Aslam for 51. To Aslam s undoing the ball kept really low and stuck just inches before his bat came down. It was an excellent review on Sri Lanka s part.

Rangana Herath finally made his presence felt snapping up Masood for 59. The dreaded sweep shot became Masood s undoing against a ball that did not turn one-bit from the middle stump.

Asad Shafiq (1*) and Azhar (5*) took their side to safety at lunch with Pakistan trailing by 298 runs. 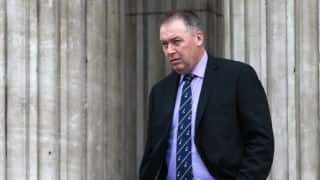