The visitors lost the wickets of both their openers Azhar Ali (15) and Ahmed Shehzad (31) as they trail West Indies by 227 runs with Babar Azam (12) and Younis Khan (0) holding their fort in the first session.

Pakistan finished the first session at the score of 59 for 2 on Day three of the ongoing First Test against West Indies at Sabina Park, Kingston. The visitors lost the wickets of both their openers Azhar Ali (15) and Ahmed Shehzad (31) as they trail West Indies by 227 runs with Babar Azam (12) and Younis Khan (0) holding their fort in the first session. For West Indies Alzarri Joseph and skipper Jason Holder took the wickets of Azhar and Shehzad. Initially, in the day, West Indies were bowled out for 286 as Mohammad Aamer took his career best bowling figures of 6 for 44. FULL CRICKET SCORECARD: Pakistan vs West Indies 2017, 1st Test at Jamaica

The start of the Day Three was delayed early on due to the wet outfield. But after a delay of around 90 minutes the game with West Indies skipper Jason Holder and last-man Shannon Gabriel at the crease. The hosts resumed from their overnight score of 278 with both batsmen going for anything that was pitched wide. Sticking to this technique, West Indies managed to add more just 8 runs as Mohammad Aamer disturbed the woodwork of Gabriel taking career-best bowling figures.

Pakistan started their batting on a sturdy note with Azhar and Shehzad playing some cracking boundaries. Shannon Gabriel was eventually taken off the attack by Holder as he gave away too many loose deliveries leaking runs, but from the other end, Joseph continued bowling in tandem. The young pacer was rewarded soon as Azhar chased an away going delivery top-edging to wicketkeeper Shane Dowrich who took a neat catching leaping to his right.

This wicket saw a dip in Pakistan scoring as West Indies bowlers Joseph and Holder kept bowling stringent spells not letting Babar or Shehzad any opportunities. But Shehzad having been out in the middle decided shifted his batting gear scoring some glorious boundaries through the cover regions. But Holder trapped the right-handed opener a few overs before the end of the session.

Younis who is short of 23 runs from becoming the first batsman from Pakistan to enter the 10,000 club is yet to get off the mark having played 10 deliveries whereas Babar is still to get in his strides having scored just 12 off 42 deliveries. 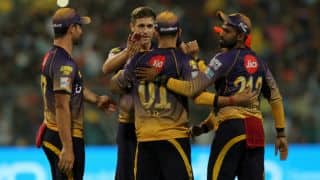 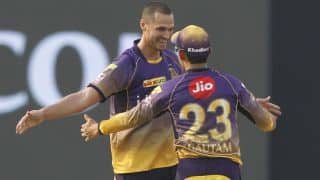