Pakistan captain Misbah-ul-Haq is unbeaten on 47 and has gone into lunch 2-run short of 5,000 Test runs in Test cricket.

Sarfraz Ahmed (53*) scored his 12th test fifty taking Pakistan to 322 for 5 at the end of the first session on Day Three of the first Test against West Indies at Sabina Park, Kingston. Pakistan now have attained a 36-run lead over the hosts. Pakistan captain Misbah-ul-Haq is unbeaten on 47 and has gone into lunch 2-run short of 5,000 Test runs in Test cricket. West Indies were successful in getting the wicket of overnight batsman Asad Shafiq (22) as Shannon Gabriel got his 3rd wicket of the game within the first hour of day s play, but since then Misbah and Sarfraz have dominated the first session. FULL CRICKET SCORECARD: Pakistan vs West Indies 2017, 1st Test at Jamaica

Resuming from the overnight score of 201 for 4, Pakistan started the day on a positive note. Shafiq and Misbah played some glorious drives for boundaries against the West Indies pace attack. Gabriel, Alzarri Joseph and Jason Holder swung the ball both ways against the two right-handed batsmen, but this did not stop the flow of runs for Pakistan. Shafiq looked more at ease as compared to his skipper keeping the scoreboard ticking and hitting boundaries against anything that was pitched short, outside off or down the leg-side.

But against the run of play, Gabriel got the important breakthrough dismissing Shafiq. The extra pace and bounce climbed on to Shafiq who looking to defend the ball managed a thick edge giving wicketkeeper Shane Dowrich an easy catch.

But Sarfraz who walked in a pressure time played excellent cricket. He looked attacking right from his first ball scoring runs regularly. He ensured of not letting the flow of runs stop releasing his captain from the pressure.

Misbah, on the other hand, had some nervy moments against spinner Devendra Bishoo. Bishoo who resorted to tossing the ball up saw Misbah edging some outgoing deliveries but only to see ball dropping well in front of the slip cordon. But as Sarfraz kept scoring runs from the other end, Pakistan easily surpassed the West Indies total.

As the time passed by Misbah getting in his strides started dealing in singles and doubles from his end. It was just in the ultimate over of the first session that Sarfraz scored got to his fifty and also scored his 2,001 runs in Test cricket. This partnership has now gone up to a valuable 86 runs in 132 balls for the 6th wicket. 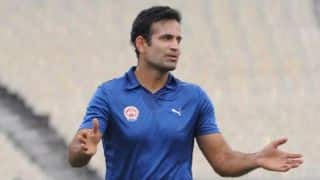 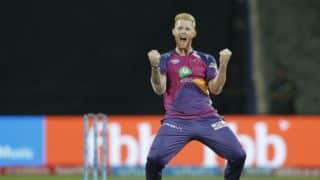