With the last day of this series opener all to play for, Pakistan have got the upper hand and are in pole position to win this riveting encounter.

Yasir Shah spun his web around the West Indies top-order in the second innings, claiming 4 wickets and putting the hosts at 93 for 4 at stumps on Day Four of the first Test at Sabina Park. West Indies are still trailing Pakistan by 28 runs with 6 wickets in hand and are most probably staring at a defeat in this first of the three-game Test series. For hosts, debutant Vishaul Singh and nightwatchman Devendra Bishoo are at the crease and are yet to open their accounts. With the last day of this series opener all to play for, Pakistan have got the upper hand and are in pole position to win this riveting encounter. FULL CRICKET SCORECARD: Pakistan vs West Indies 2017, 1st Test at Jamaica

West Indies started off their second innings well with Kraigg Brathwaite and Kieran Powell playing well against the Pakistan pace attack. Mohammad Aamer, Mohammad Abbas and Wahab Riaz got the ball to move both ways but the West Indies opening pair defied the pace trio any wickets. It was then that Misbah-ul-Haq got his ace-spinner Yasir into the attack with the hopes of exploiting the rough patches on the wicket. Yasir struck on the very first ball of his over removing Brathwaite (14). He cleaned up the right-handed opener as the ball zipped through the rough patches dismantling his woodwork.

This wicket brought debutant Shimron Hetmyer at the crease at the score of 22 for 1. Hetmyer and Powell played some excellent strokes against Yasir displaying great technique of counterattack. Not only they stopped Yasir s dominance but also hammered the Pakistan pace trio scoring runs in a flurry. They both constructed the West Indies innings in a neat fashion at a decent pace. Hetmyer smashed Yasir over long-on to bring up the fifty-run partnership between these two for the 2nd wicket.

But Yasir had the last laugh as he got the wicket of Hetmyer (20) the very next delivery. Yasir bowled a leg-break which spun too much and bounced to a great extent. Hetmyer got on the back foot but the ball took the inside edge, deflecting from his pads and then rolling back onto the stumps.

But these two wickets did not deter Powell who went on attacking Yasir despite the amount of bounce and spin he generated.

But Yasir did not stop here as he then trapped Shai Hope (6) plumb. The batsman did go for a review but wasted it eventually. Seeing the damage Yasir had done to the top-order, West Indies opted to send in Bishoo as a nightwatchman. But Yasir aggravated misery on the hosts as he got the important wicket of Powell (49) in the dying stages of the game. Powell edged a googly from the shrewd spinner to Younis Khan at the first slip putting West Indies in a precarious situation at stumps.

Earlier in the day, Pakistan resumed from their overnight score of 201 for 5. The visitors lost Asad Shafiq (22) early in the first session, but it was wicketkeeper-batsman Sarfraz Ahmed who dominated the first session. Sarfraz along with Misbah scored a vital 88-run stand for the 6th wicket which saw the game going away from the hosts.

West Indies bounced back in the second session taking the wickets of Sarfraz (54), Aamer (11), Wahab (9) and Yasir (8). As this kept on happening at one end, Misbah kept on churning runs from the other end. He ensured of keeping the scoreboard ticking and going past the 400-run mark. Misbah and Abbas scored 34 runs for the final wicket, as Abbas was rapped in the pads by Roston Chase leaving the Pakistan skipper stranded on 99*: making him the first batsman from Pakistan to do so. 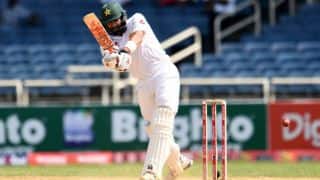