Pakistan lead the three-Test series, after winning by 56 runs, and will look to win the next game to seal the fate of the series.

In what turned out to be a riveting last day’s play between Pakistan and West Indies in the first Test, Misbah-ul-Haq felt the impact of evening dew on the experimental pink ball made run-scoring easy on Day Five. In a steep yet competitive run-chase of 346, West Indies started Day Five at 95 for 2, still needing 251 runs to win. West Indies lost few quick wickets but Darren Bravo‘s fighting and patient knock of 116 set the tone for a memorable last session. West Indies were going all guns blazing till the time the left-hander was in the middle but lost plot completely after his departure. Pakistan lead the three-Test series, after winning by 56 runs, and will look to win the next game to seal the fate of the series FULL CRICKET SCORECARD: Pakistan vs West Indies, 1st Test at Dubai

According to Cricbuzz, “A bit of dew in the evening session was effecting the ball. With the sogginess, the ball was getting softer so different factors contributed and helped the batsmen score runs. Spinners and fast bowlers will get more help and reverse swing will also be there in the dry weather. But in the evening the pink ball was getting wet and the seam was swelling and it got softer. The pitch was on the slower side, I don’t know why, but otherwise the Dubai pitch normally starts deteriorating after two days. But since the dew was helping the pitch bind again, it wasn’t breaking up at the same rate it used to. But in the end, it was a good Test match, both teams played really well, and it’s good for the Test cricket”, told the 42-year-old.

Misbah also admitted there were some nervy moments for him and his players when Bravo looked set to turn the tables on Pakistan’s domination for the first three days of the game. “It was tough for the team and for the captain. Certainly, you were ahead of them for almost three and a half days but in one session you had given the advantage to the opposition. Maybe had we batted for another 15 overs, with 400 runs on board we could have got them out early”, stated the winning skipper.

After an exciting start to the series, the teams now move to Abu Dhabi for the second game from October 21. 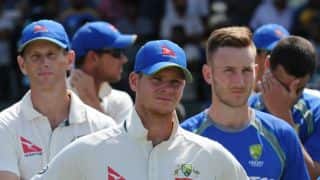